We've got the skinny on Infogrames' upcoming Looney Tunes-licensed game.

While gamers are rightfully wary of any and all licensed products, every now and again a publisher looking to cash in somehow gets it right. Such certainly seems to be the case with Sheep Raider, the upcoming Infogrames-published sneaker based on the relatively little-known Warner cartoon. Cleverly borrowing elements from both its license and a host of tight games, Sheep Raider looks like it'll make a fine addition to the PlayStation's dwindling roster of upcoming releases.

The game is based on the Warner Bros. cartoon starring Sam Sheepdog and Ralph Wolf--the stern yet good-natured yellow canine and red-nosed Wile E. Coyote look-alike, respectively. Much like in the cartoon, Ralph's job is to steal sheep, and Sam's job is to protect them. While the two have their share of scrapes on the job, they're rather cordial to each other once they clock out. The game mixes it up a bit, however, by setting this unique dynamic against the backdrop of a game show hosted by Daffy Duck. Each of the game's stages takes the form of a feature on said show, with Ralph being the contestant and the sheep, presumably, unhurt in the process.

From a gameplay standpoint, Sheep Raider is a pleasant mélange of platformer and MGS-style stealth mechanics. The stages take the form of compact 3D environments, which Ralph must traverse through a variety of means. The ultimate objective of each stage is to steal a set number of sheep from Sam, and to do so, Ralph must employ a host of tactics and make use of a multitude of cartoonish tools. Primarily, you'll have to sneak your way to Sam's area as Ralph and somehow swipe the required count of sheep. Sneaking is achieved by pressing the L1 button while moving. Sam is pretty keen to any intrusions, however, so you'll have to keep constant track of the pictorial "radar," which clues you in as to Sam's level of attentiveness. To evade his watchful eye, you'll have to tiptoe through and around obstacles, proceeding when his attention is elsewhere and acting only when you're sure he'll be no wiser. If you're spotted, you can hightail it to safety by holding down the circle button while moving, which also triggers a pretty sharp running animation. Most of the stages won't make it as simple as creeping over to Sam's pasture and swiping sheep, though. More often than not, you'll have to piece together elaborate cartoonesque contraptions to proceed. One stage, for example, starts you on a fairly remote plateau, from which you'll have to jetpack to another to be closer to the flock. Once there, you'll have to access the platform's mailbox--from which you get all of the game's gadgets--to acquire a giant rubber band. You'll then use the rubber band to bungie-jump from a small cliff onto an elevator platform, on which you'll place bait for the sheep. Once you've lured the sheep into your grasp, you'll have to carry them to a pair of trees at the platform's edge. As you've undoubtedly imagined, you'll use the rubber band to fashion a giant makeshift slingshot, which you'll use to propel the sheep into the pen near your starting point. And after you've caught enough sheep, you'll propel yourself. Most of the game's levels require you to mastermind similarly convoluted schemes to emerge successful, and the result seems to be an altogether pleasantly playable title.

The game's presentation is also pretty sharp, especially when considering the platform. While the character models aren't terribly detailed, Infogrames Lyon has managed to capture the essence of each through brilliant animations--dust will gather at Ralph's feet when you perform the dash, and Sam's brows are convincingly furrowed as he scans the horizon. Most of the characters also bear a slight cel-shading effect that highlights their outlines rather decently. Classic cartoon sounds accentuate their movements as well, lending a nice air of legitimacy to the whole package.

Open-minded gamers looking for a well-designed, not to mention amusing, diversion might consider checking out Sheep Raider when its September release rolls around. With the game priced to sell at less than 20 dollars, it seems as if you can't go wrong. 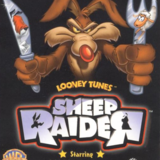