The game is in development at Big Deez Productions in association with Shaquille O'Neal himself. "We're so excited to be working with you all. You've made this experience a real joy," the studio said in an update to its Indiegogo page. "A sincere and heartfelt thank you to all of you."

Now that Shaq Fu: A Legend Reborn is fully funded, Big Deez is gearing up to enter full production, the developer said. The studio will also launch a platform where backers can contribute ideas and suggestions for the game. Big Deez also plans to release "developer diary" videos to keep backers up to date with how development is progressing.

"Our success is on your shoulders. You have made this happen for all of us and we're thrilled to have had your passion and support from start to finish," the studio said. "Our promise still stands: This time we won't Fu it up!"

Someone even claimed the ridiculously expensive $35,000 backer perk, meaning Shaq himself will DJ a party at this lucky person's house. 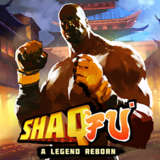