Shadow of Destiny falling on PSP in 2010

In March 2001, Konami shipped Shadow of Destiny for the PlayStation 2. More than eight-and-a-half years later, the Japanese publisher announced it is working on a PSP port of the adventure game, which received solid reviews on the PS2 and decent marks on its PC port in 2002. (The game was also released for the original Xbox in Europe and Australasia.)

Despite the diminishing returns from critics, Konami is keen to promote the forthcoming PSP port, which it says will arrive next year. Shadow of Destiny will stick to the original's storyline, which casts players as a young man who must find his own murderer. To do so, he must solve puzzles and time travel between the 16th century and the present day, picking up clues that lead him to the killer.

As was the case with the T for Teen-rated original, Shadow of Destiny will have multiple endings determined by player's choices in the game. It will be released sometime in 2010, although no specific quarter is named. For more on the original, check out GameSpot's previous coverage. 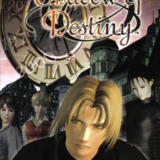