European fans of quirky Japanese role-playing games will be breathing a sigh of relief today because Shadow Hearts: From the New World is officially dated for Europe. After a wait of well over a year since the game released in North America and nearly two years since its debut in Japan, it seemed as if PAL regions might have been forgotten. Not so--the PlayStation 2 game is now penciled in for a May release date, courtesy of publishing company Ghostlight.

The game is the first in the Shadow Hearts series to switch location away from a European setting and into the New World of the Americas. Set in 1929, it focuses on a motley band of characters, including Johnny Garland, a 16-year-old private detective, and Shania, a Native American woman who possesses the ablility to fuse with powerful spirits.

Johnny witnesses an evil demon coming through a "window" whilst working on a missing person's case and becomes determined to discover the truth behind the apparition. His quest takes him to locations including New York, Las Vegas, and Roswell.

Shadow Hearts: From the New World also features the judgment ring system, as used in the previous two series incarnations, and adds the stock system, where characters can build up power to use special attacks and perform powerful combo attacks. 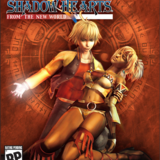