Evil slayer Sam Stone is back, but this time he's got a beautiful new graphics engine to support him.

When you get down to it, there's not much that's serious about Serious Sam, and most gamers wouldn't have it any other way. Judging from the early screenshots, Serious Sam II looks to uphold the series' sense of extreme run-and-gun action, as you once again get to play Sam Stone as you attempt to rescue the universe from waves upon waves of time-traveling enemies.

Serious Sam II is built on developer Croteam's brand-new, cutting-edge graphics engine, which takes advantage of all the latest graphics and physics. It promises environments that are 100 times more complex than what was in earlier Serious Sam games. All this graphical power will be put to good use, as you'll once again have to run around and shoot, blow up, crush, and maul your way through an opposition that comes in all sorts of shapes and sizes. There are evil clowns, witches, gun-toting goblins, demons, and even humanoid beings with giant exploding cannonballs for heads. And Croteam says that the engine will be able to handle even more enemies onscreen at the same time than before, which should result in plenty of hairy moments.

The plot, if you're interested in such things, involves Sam's journey to the planet Sirius, the new home of the notorious Mental. Sam is on a quest to find the fragments of an ancient medallion. If he collects the fragments, the medallion will give Sam the power to defeat the Mental once and for all. Of course, the plot in Serious Sam games tends to be nothing more than a pretense to run around and blow lots of stuff up. You'll battle in plenty of new areas that are larger than the ones found in the first Sam games. There are more than 40 levels and seven unique environments, from jungle, swamp, frozen tundra, volcanic planets, futuristic cities, and more.

We saw the Serious Sam II engine at last year's Game Developers Conference, and we've even had a chance to see it recently. It certainly does look like Serious Sam, but with a far better engine. Meanwhile, the over-the-top action remains intact. We saw Sam run around a Chinatown-type area, blasting enemies with a variety of ridiculously overpowered weapons. The Serious Sam games have always paid tribute to the old-school Doom run-and-gun games, and Serious Sam II is no different. Expect Serious Sam II to ship for the PC and Xbox this fall. 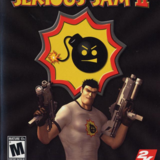