The Serious Sam Indie Series is set to kick off next week, as Serious Sam: Double D will launch August 30 on Steam, Get Games, and other PC downloadable game storefronts. The previously announced Xbox 360 edition of the game will follow at a later date.

Following up on Mommy's Best Games' Xbox Live Indie Games offerings like Shoot 1UP and Weapon of Choice, Double D is a side-scrolling run-and-gun shooter based on the Croteam icon. Beyond the change in genre, Mommy's Best Games is also introducing a new "Gunstacker" mechanic, which players can use to simultaneously wield a cross-section of the game's 32 firearms.

That small arsenal of options will help Sam shoot his way through Double D's 18 levels, taking on vintage Serious Sam villains like the headless, bomb-handed kamikaze soldiers and some new creatures like the Vuvuzelator, a sentient stack of pancakes with a plethora of protruding vuvuzelas. The game also includes four major boss fights and three distinct time periods.

The remaining two installments in the Serious Sam Indie Series--Be-Rad's auto-running Serious Sam: Kamikaze Attack and Vlambeer's turn-based role-playing game Serious Sam: The Random Encounter--will also be released at a later date, along with Serious Sam 3: BFE for the Xbox 360, PlayStation 3, and PC. 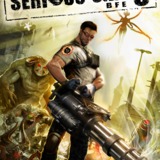