The developers of Infinite Space are working with Konami on a sci-fi hybrid on the PSP.

If you've heard of the developers known as Nude Maker, chances are you may have played a game called Infinite Space, a sci-fi ship-building role-playing game, and Steel Battalion, a mecha-piloting game that came attached with a large specialized controller. Nude Maker--a studio that consists of former developers from Human Entertainment (infamously known for the Clock Tower series)--is now teaming up with Konami to make a sci-fi-themed action game called Senritsu no Stratus, roughly translated as "Terror of the Stratus."

The game's tale is set in the year 2058 in Imperial Tokyo, where the human race is dying out thanks to creatures called memes. These beasts, which are made up of nothing but data and information, are somehow armed to the teeth using technology and weapons sent from their home base called the Lunar Stratus.

Of course, the humans aren't going to take this lying down. You control a trio of armed warriors from the Imperial Task Force 6, which deals with the meme threat with extreme prejudice. Leading the pack is Seishiro Kudan, a white-haired sword wielder who was forced into the alien ordeal in the first place. Following him are Sasahara Nanase, a blonde-haired no-nonsense riflewoman; Usami Makoto, a short-blade wielder; and Azuma Takahiro, whose weapon type we could not figure out at this point. Helping out behind enemy lines are Misogi Takanosu and Takumi Yagami, high-ranking captains who are also childhood friends.

While all that potential drama sounds well and good, the real meat of the game is its blending of two genres: 2D side-scrolling and top-down isometric-view shooting a la Viewpoint. Specifically, the first half of the game puts you with a trio of the aforementioned characters as they traverse through the battlefield fighting tiny alien memes (led by a giant towering meme overlooking the warzone) using each character's special weapons and special moves. You can switch between characters, depending on the situation and the type of enemies you'll be facing. Ideally, picking off targets from afar would require Nanase's rifle, while clustered-up groups of memes would be susceptible to Seishiro's long-wide blade slashes.

You're not wandering around aimlessly, however; you'll have to search for the giant meme's weak spot and gather enough information to send to headquarters. Once that is done, the viewpoint switches, and you get to destroy the kaiju-sized meme using your equally large Arabaki mecha. This particular fight will be one-on-one and will be reliant on the strategy formed during the 2D segments, so expect to beat up the giants by exposing and hitting weak spots through elaborate processes.

An action-heavy game like this would presumably be reliant on a grading and scoring system if the bottom numbers on the user interface are of any indication. The faster you assimilate the info and defeat the giant meme, the higher the score would be. There also seemed to be an Evangelion vibe from this game, but the whole brink-of-extinction-future-with-giant-aliens-assimilating-life shtick can be said to be true for most '90s sci-fi animes featuring giant mechas. At the very least, Nude Maker might be doing a throwback to such a trope storywise.

Senritsu no Stratus is set to come out in 2011 on the PSP, so we can safely say that we'll get a thorough hands-on at this year's Tokyo Game Show at Konami's booth. An English version of the title has yet to be confirmed. 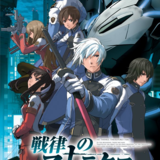