Senko no Ronde invading US

Ubisoft confirms it is bringing G.rev's shooter/fighter across the Pacific in May; American version adds "WarTech" prefix to title.

Fans of all things Japan were elated in February, when several Japan-only releases were spotted on the Web sites of North American retailers. Though the publishers associated with those games weren't ready to confirm their domestic releases at the time, one finally admitted it would today.

Ubisoft announced that it will be publishing the Japanese game Senko no Ronde in North America under the slightly more American name WarTech Senko no Ronde. The Xbox 360 game was developed by G.rev Ltd. and will be in stores next month.

WarTech is set in a distant future where humans have expanded into other galaxies and nations are at war over the Earth, which is being used to mine natural resources. Players will suit up in one of eight Rounder Mechs and use special moves and power-ups to fight against enemies. The game features a single-player story mode and head-to-head battles over Xbox Live.

WarTech Senko no Ronde is rated T for Teen. 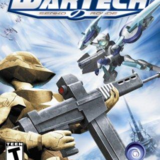