Senator Charles E. Schumer (D-New York) is embarking on a crusade against Eidos, telling the New York Daily News that the British publisher is readying a game that makes "Grand Theft Auto look like Romper Room." The game is 25 to Life, an action title where players take on the role of a drug dealer named Freeze who gets into gunfights with police officers, uses civilians as human shields, and shoots rival gang members.

Schumer is calling on New York retailers not to stock the game or sell it. "There is nowhere that the value of the police force is felt more strongly than here in New York, and to sell a video game that denigrates their value is simply unacceptable," Schumer said. "You certainly don't need a degree in criminal justice to understand that when you make sport of behavior that is dangerous and destructive you reinforce it. The last thing we need here in New York is to reinforce a destructive culture of violence and disrespect for the law."

A press release from Schumer's camp calls 25 to Life one of the worst in a string of violent games, finding that it "sets gang members against police and sends them on a mission to fight their way through the streets, killing whatever gets in the way."

Not only is Schumer urging retailers not to sell the game, but he is also asking that Sony and Microsoft end their licensing agreements with Eidos. "Little Johnny should be learning how to read, not how to kill cops," Schumer said. "The bottom line is that games that are aimed and marketed at kids shouldn't desensitize them to death and destruction."

25 to Life is currently in development by Utah-based Avalanche Software. The game is scheduled for release this August on the PlayStation 2, Xbox, and PC. For more information, check out GameSpot's previous coverage. 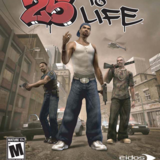