Prepare yourself for some terrible puns.

You may have seen Sega teasing a new game recently, and now the company has revealed its upcoming title. It's a spiritual successor to Theme Hospital called Two Point Hospital, and it's coming to PC in "late 2018."

The game is being made by a new UK company called Two Point Studios, formed by some of the ex-developers of Theme Park, Black & White, and Fable. Together, Sega and Two Point say the game will come "packed with the humor, charm, and replayability fans of the genre have come to expect," the former of which is evident in the first trailer--take a look at that above.

"We're delighted to finally announce the fruits of our partnership with Two Point Studios and reveal Two Point Hospital to the world," said Sega Europe's VP of publishing, John Clark. "We're committed to finding and working with the best new studios, ones that fit with Sega's ethos to deliver new IP with strong franchise potential. Two Point Studios' vision for Two Point Hospital and their ambitions for it fit perfectly with that notion and we look forward to releasing their game later this year."

Theme Hospital launched back in 1997, itself a spiritual successor to Theme Park. The games spawned a series of management sims that included Theme Aquarium, Sim Theme Park (Theme Park World in Europe and Australia), and SimCoaster (Theme Park Inc in Europe). However, the latter was the final game released by the series' developer, Bullfrog, after the company was acquired by and merged into EA. 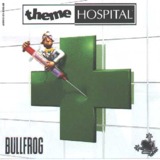