Publisher reportedly chooses not to release OutRun2 and Virtua Cop 3 for the console.

The Japanese gaming magazine Dorimaga--by way of the-magicbox.com--is reporting that Sega has decided not to release its OutRun2 and Virtua Cop 3 games for the Xbox. This is surprising, given that both games run on the Xbox-based Chihiro arcade hardware, making a port a simple matter.

Is it true? Sega's American publicity reps aren't talking, telling GameSpot "our policy is to not comment on rumors." However, a company insider told Dorimaga that the cost of producing a whole new light-gun controller for the Xbox made the Virtua Cop 3 port economically unfeasible.

As for OutRun2, the Xbox's lack of popularity in Japan was cited as the motivating factor. 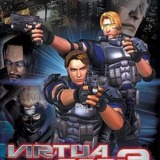