For the three months ended June 30, Sega Sammy revenues were up 51 percent year-over-year to ¥91.3 billion ($1.1 billion). The bottom line improved as well, as the company turned the previous first quarter's ¥10.3 billion ($119 million) net loss into a profit of just over ¥7 billion ($81 million). While the company is best known in the West for its home video games, most of the gains were attributable to its thriving pachinko and pachislot business, which more than doubled revenues year-over-year to post sales of ¥48.9 billion ($566 million).

As for games, Sega sold ¥10.6 billion ($123 million) in software for the quarter, up 27 percent year-over-year. However, its two biggest new releases--Iron Man 2 and Alpha Protocol--were deemed slow sellers by the publisher. Iron Man 2 sold 1.12 million copies in the US and Europe, while Alpha Protocol managed 700,000 in the same regions. Despite "generally weak" demand in the two continents, the gaming business improved its performance, posting an operating loss of ¥600 million ($7 million), considerably better than the ¥4.5 billion ($52 million) loss it posted the previous first quarter.

The publisher summed up its gaming woes, saying it "needs to adapt to [a] changing business environment in which the market demand for new content geared to social networking service and smartphone is expanding." 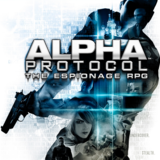