A new cel-shaded baseball game is in the works for the PlayStation 2 and GameCube in Japan.

Sega of Japan has officially announced that Fierce Fight Professional Baseball is currently in development for both the PlayStation 2 and the GameCube in Japan at WOW Entertainment, the same development studio behind Home Run King. The game will feature 12 professional Japanese teams and 300 actual players, each of which has statistics taken from the last season of Japanese baseball. The development team has not only given the game a distinct look by using cel-shading, but it has also tried to copy the mannerisms of individual players.

Fierce Fight Professional Baseball is scheduled for release on the PlayStation 2 and the GameCube this summer in Japan. 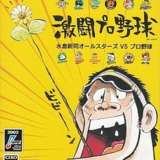