High Voltage's 3D fighter for the Wii gets pushed back to July 6, but will launch at $30 price point.

Gamers looking forward to High Voltage Software's Tournament of Legends received a bit of good news and a bit of bad news today. Starting with the bad, Sega has delayed the game by a couple months. Previously announced to launch May 18, the 3D fighter for the Wii will now arrive July 6.

As for the good news, Sega revealed a budget-friendly price point for the game. When it makes its belated arrival, Tournament of Legends will carry a suggested retail price of $29.95.

The release date isn't the biggest change the game has seen in the course of its development. Now a fantasy-focused 3D fighting game with a T-for-Teen rating, Tournament of Legends began life as Gladiator A.D., a grim and bloody fighter that would have been certain to garner an M-for-Mature rating. That title was apparently never attached to a publisher, as Sega's first public involvement with the project was the original announcement of the fighter's revamped version.

Tournament of Legends allows players to jump into one-on-one battles with a roster of mythological combatants, including a minotaur, gorgon, golem, gladiator, valkyrie, and more. The fantasy focus follows through to the fights themselves, as players will be able to cast magic and summon assistance from the likes of man-eating lions and venomous snakes. The game is being built on High Voltage's Quantum 3 engine, the same technology behind The Conduit and the studio's other announced game, The Grinder.

For more on Tournament of Legends, check out GameSpot's previous coverage. 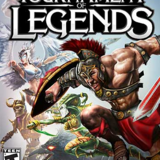