Gamers may recall the old SNES part-action, part-simulation title Actraiser, which allowed players to build up civilizations while requiring them to clear demon-infested areas in 2D side-scrolling glory. Sega will be putting a new spin on the hybrid concept with its newest PlayStation Vita title, announced this week in Japanese gaming publication Famitsu.

The game--called Samurai & Dragons--will be split into two parts: action and strategy. The former will require up to four players to fight their way through a dungeon, defeating dragons, mummies, and ogres, as well as getting loot. The strategy part of the game will involve players taking their spoils of war to build up a customizable city and train a monster army. During this part, gamers will also need to form alliances with other players or proceed to conquer their cities with their own army.

The game's producer is Masayoshi Kikuchi, who also served as producer on the Yakuza series, director on Jet Set Radio Future, and planner for the Panzer Dragoon series. Sega's Online Entertainment Research Department, the team developing the title, said that the PS Vita was chosen for the project due to its online connectivity and potential of the device's touch-screen and motion sensors.

No release date has been announced for the title at this point in time. 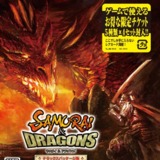