Some things change; some stay the same. 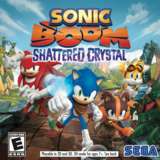 Why is Sonic wearing a scarf? What's with all the bandages? When did Knuckles start working out? These questions and many more were on the lips of Sonic the Hedgehog fans worldwide when longtime game developer Sega unveiled Sonic Boom earlier this year. The announcement described Sonic Boom as taking place in a parallel universe to the existing Sonic the Hedgehog franchise, complete with its own cartoon series, children's toys, and two new video games for the Nintendo Wii U and 3DS, respectively. Sega was also quick to point out that Sonic Boom is not a replacement for the existing Sonic. Instead, think of it as a complement in the same way the Ultimate Marvel series complements Marvel comics, or Mega Man Legends complements Mega Man.

The announcement also included a new look for Sonic and some of his friends, a look that took the Internet completely by surprise. Love 'em or hate 'em, these new designs are what Bob Rafei and his team at developer Big Red Button have been obsessing over for the past three years. Armed with over two decades of game-making experience, Rafei has brought together a team of industry veterans hailing from the likes of Naughty Dog, Heavy Iron, and High Impact Games to tackle the Herculean undertaking. I recently had the opportunity to speak with Rafei about walking the razor's edge between paying tribute and being unique, and about giving the blue blur a fresh coat of paint.

When Sega approached Big Red Button three years ago with Sonic Boom, the young team leapt at the opportunity. According to Rafei, Big Red Button was founded specifically to create character-focused action games, and Sonic Boom was exactly the sort of high-profile project his team needed to prove itself. The idea to make it a parallel universe with a unique style was decided early on; however, the decision on how this new style would look did not come as easily. "We went pretty wide with the designs at first, and by going too wide, we lost some of the spirit of the character and had to rein it in," said Rafei. "Sonic Team and Sega were very open-minded about our approach, and accepting of a lot of things we were doing. Ultimately, because of some of our really wacky ideas, we did find the boundaries of things we could and couldn't do."

"We experimented with different colors and surface features on the characters, such as fur or scales, and quickly Sonic Team came back with their discomfort of that. They were great guardrails for us to understand when we were deviating too far from the character. Without their input, the character would have been a lot more alien and different from what Sonic is known for." Discomfort may be putting things mildly, particularly in the case of Takashi Iizuka, the current head of Sega's Sonic Team in Japan. As Rafei recalled, "Early on, when we had our first review of all the crazy things we wanted to try, Iizuka-san came down to Los Angeles and looked through all the different concepts."

"I felt sorry for the guy because sometimes he couldn't actually look at the screen--it was too traumatic seeing all the crazy stuff we wanted to do. Over the course of that meeting, when we were coming up with new ideas, we had a very sincere--just two adults talking--conversation about why a character should or should not wear pants, and that was a very surreal moment in my life and my career," Rafei continued. "But it helped us understand the rules of clothing in this universe. Any small adjustment went a very long way, so we had to be very careful."

As Rafei and his team continued to refine their designs for Sonic and his friends, they were forced to ask themselves many of the same questions that have been bandied about the Internet in the weeks after Sonic Boom's announcement. With four Crash Bandicoot and four Jak and Daxter games under his belt, Rafei is confident in his ability to bring a strong group of characters to life, and feels his team did an excellent job of solving the puzzle of Sonic Boom's design. So, what were those questions the team--and consequently the entire Internet--were asking?

When did Knuckles start working out?

Because they were giving Sonic a new look, Rafei knew they would be attracting people who had possibly never heard of--or knew little about--Sonic the Hedgehog. With that in mind, there was one thing above all others that was most important about these designs: the silhouettes. "It's really important for me to make sure when you have an ensemble of characters that they all have distinct shapes so you can quickly [internalize] the variety between them. With that comes a quick understanding on who these characters are. That's why, for instance, we requested to beef up Knuckles, to make him look more like the bruiser he is."

What's the deal with all the sports tape?

"From my perspective, it was important the characters have a practical heroism to them and not vanity, which is more fitting for villains. The arm and leg wraps were inspired by fighters and American football players--two groups who don't really care what they look like so long as the end result is that they kick ass at what they do. That was something I wanted associated with these characters. The sports tape is meant to show the characters are not vain; it's just a part of their daily routine. When the world is in jeopardy, you don't have time to worry about what you look like. It's a more grounded approach for the characters.

"This is in contrast to Eggman and his very formal, military-esque attire. That's a very conscious design choice because his character is more vain and is very concerned with what his robots look like and what he looks like. Hopefully you can see the thought that went into this and not just something we threw out for the sake of it."

Why is Sonic wearing a scarf?

"The bandanna also raised a lot of eyebrows, and for me this is another action adventure trope. It comes from the lone ranger, the cowboy, even the snowboarder archetypes--it's all practical as a requirement against the elements. It's kind of ingrained now in our consciousness what an action adventure character should wear, and we experimented with different items, and the bandanna really resonated with us. It comes down to a practical need of the character adventuring and not vanity."

"Ultimately, we wanted to make sure [Sonic Boom] didn't conflict with what was in canon; we wanted to reinforce it. For example, my inspiration, along with the rest of the art team's, comes from a lot of Miyazaki, Disney, and Pixar films, so we wanted to dive into some archetypal things for the environment--specifically nature versus industry. When you see more of the village and of the environments we've built, you'll see their lushness and organic quality, and that's really important to establish early on. Not only is it canon, but subliminally you want to protect that [natural beauty]. Then, when you see the robots and machinery associated with the villains, it becomes a very archetypal conflict that just fits right into the Sonic universe."

As the video game industry gets older, these sorts of updates and redesigns are inevitable. Styles change, techniques are refined, and what's in vogue today could be gone tomorrow. However, as Rafei noted, if you approach this challenge with the right attitude, it doesn't have to be a negative thing. "Change just for the sake of change is not a worthy goal by itself and not as impactful as change that serves a greater purpose. For Sonic Boom, this revision was based on enhancing the epic adventure story. We want Sonic fans new and old to instantly recognize the team's individual [strengths], and we didn't want Tails, Knuckles, and Amy to feel subordinate to Sonic, either in visual appeal, personality, or, most importantly, gameplay.

"No other entertainment medium evolves as fast as the gaming industry. The very platforms where games are experienced can look radically different in 10 years or less. This rapid evolution really lends itself to experimentation with classic and iconic titles. Legacy characters--especially ones that are generational--are natural candidates for this varied, stylistic approach. How many shades of Batman have we seen in the 75 years?" And, for that matter, how many different shades of Sonic--from classic to modern to werehog--have we seen since his initial debut back in the early 90's? The fact that this speedy hedgehog still warrants such attention after so many years is a testament to the support and dedication of his fans, and that's something to be celebrated, even if Knuckles had to get a lot bulkier along the way.