It's Sonic's 30th birthday, and the blue bur is celebrating by popping up just about everywhere.

Sega hosted a Sonic Central presentation to outline plans for the blue hedgehog's 30th anniversary, and revealed a ton of games, crossovers, and merch. We received word of a new Sonic game, a remastered favorite from 2010, and a compilation of the games that started it all. Read on for all the details.

A brief video teased a new Sonic game in development from Sonic Team, the studio behind Sonic Generations and Sonic Forces. The teaser was short on details (and also just short) so we don't know much about it, but it showed Sonic dashing his way through some very realistically rendered trees before drawing a symbol with his speed-trail. The teaser ends with a 2022 release window, and a list of release platforms: PC, PS4, PS5, Xbox One, Xbox Series X|S, and Nintendo Switch.

For old-school Sonic fans, Sega is working on a compilation for next year that brings together Sonic the Hedgehog 1, 2, 3, Sonic & Knuckles, and Sonic CD. Sega promises more information is coming soon.

Sonic Colors is Back, in Ultimate Form

Sonic Colors: Ultimate, a remastered version of the 2010 Wii game, is coming later this year. It will include remastered visuals and some bonus goodies for preorders. A digital deluxe version even includes a few days of early access for those Sonic fans who can't wait to get their speed on.

Earlier this week Sega debuted Olympic Games Tokyo 2020, an Olympics-themed game without the apparent involvement of its Mario & Sonic crossover. But you'll still be able to play homage by dressing your avatar up in a Sonic costume. Sega also promises Sonic or Sonic-themed items will be appearing in multiple other games, including some you might not expect like Two Point Hospital. The tease also appeared to show other crossovers to be announced like Minecraft.

The mobile game Sonic Forces: Speed Battle is getting a limited-time anniversary event which will introduce private races, and a special character is coming that will let you play as Super Sonic with the power of the Chaos Emeralds. In another mobile game, Sonic Dash, a pirate event will introduce Pirate Sonic and Captain Shadow. Sonic Racing will be introducing classic characters, cars, and three new tracks along with remixes. And later this year Sonic Forces and Sonic Dash will bring back the Warehog from Sonic Unleashed.

Finally, if you want to show your love of Sonic outside of video games, Sega has a bunch of merchandise coming this year. That includes a Giant Eggman playset from Jakks Pacific, a hardcover Sonic encyclopedia from Dark Horse, apparel from H&M, an IDW 80-page comic book, and commemorative gold and silver coins from APMEX. 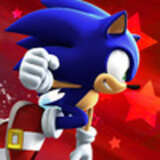