But you may have to read Japanese to play it.

The Secret of Mana series is coming to Nintendo Switch in Japan. Square Enix released a brand new trailer today and announced it will release the Seiken Densetsu Collection on June 1.

The collection includes Secret of Mana (Seiken Densetsu 2 in Japan) along with its prequel, Final Fantasy Adventure (Mystic Quest in Europe), and sequel Seiken Densetsu 3.

The announcement comes one day after the game's official Japanese Twitter account posted a teaser video of Seiken Densetsu 3 being played on a Nintendo Switch. Unlike the two earlier games, Seiken Densetsu 3 was never released outside of Japan.

A special screen-change mode will also allow you to change between several screen sizes when playing Final Fantasy Adventure (originally released on Game Boy in 1991 as a spinoff of the Final Fantasy series).

There's no word on whether the series will be getting an English-language release, but thanks to Switch's region-free settings you will be able to access the games in the eShop and play the Secret of Mana series in Japanese from anywhere in the world. 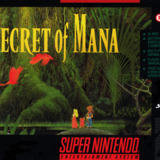