Bandai will release a new action game based on the popular Gundam Force TV series.

Bandai Entertainment's SD Gundam Force cartoon series has become a mainstay of the Cartoon Network. The show takes place in the land of Neotopia, where humans and robots coexist peacefully--that is, until the Dark Axis, evil invaders from another dimension, set their sights on conquering Neotopia. Enter SD Gundam Force. Made up of several different Gundams with unique abilities, the team fights the Dark Axis, hoping to restore peace to Neotopia. This fall, Bandai will release a third-person action game based on the series for the PlayStation 2.

In the game, you'll be able to play as your favorite characters from the SD Gundam Force TV show, such as Captain Gundam, Zero the Winged Knight, or Musha Bakunetsumaru. The game will also feature original characters and an all-new storyline set across three different worlds, and you'll be able to select from several different weapons and items before heading into battle. 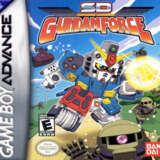