Though games like Serious Sam have done much to improve the reputation of value-priced software, there's still a general conception that these games are shallow and generally not worth purchasing despite the lower price tag. As a part of its return to game publishing, Virgin Interactive plans to release a series of full-featured games with a lower price tag--a feat that the company has been able to accomplish by reducing box size and transplanting manuals onto the game CD. Screamer 4x4, a realistic off-road racing game, will be one of the first games shipped under this new policy, and judging from an early build, it has more than enough features to compete with any full-priced game.

There are five main options to select from in Screamer 4x4's single-player mode. The championship option lets you compete through a series of different tracks with the main objective of accumulating as many points as possible so that you're in first place after you've completed the last track. In the trophy mode, you can practice on various championship tracks and find where gates are located. The free ride mode is similar to the trophy mode, but there are no gates--which are basically checkpoints--to be found on the track. This and the tutorial mode are especially helpful for becoming familiar with terrain, the individual abilities of each vehicle, and learning how to approach gates without receiving a penalty. The last mode, pathfinder, is probably one of the more entertaining modes because it requires you to think and plan out a path to a gate that's usually placed in a hard-to-reach area of the track.

Before the start of each race, you can create and edit the driving team by giving it a name, adjusting the color of the uniforms, or by changing the gender and build of the driver and codriver. You can also select from a series of vehicles that include well-known manufacturers such as Jeep, Mercedes, Mitsubishi, Toyota, and Land Rover--and additional vehicles can be unlocked as you progress through the game. In addition to customizing the team, you can select from some options that affect vehicle performance. Some of these options are as simple as changing the transmission from automatic to five-speed manual, but others have a little more impact. For example, tire pressure and suspension can be set at three different levels--hard, normal, and soft. If you select hard for both of these vehicle characteristics, your car will have a little more instability navigating over undulating terrain, though theoretically, the vehicle has more grip. Conversely, soft suspension and tires lower the vehicle's overall grip rating but increase off-road performance. It's also possible to toggle the ABS brake system off and on, but newcomers will want to keep it on so that they can brake a little easier.

Screamer 4x4 has all the single-player modes you might expect from a typical off-road racing game, but it also has a surprising number of multiplayer modes that should go a long way in extending the game's replay value.

In addition to the five racing options in Screamer 4x4's single-player mode, there are five multiplayer options, each with a different style of gameplay. The first multiplayer option, king of the hill, lets you select from a series of tracks that are generally constructed as large platforms with four starting gates. The basic objective is to stay in the center of the platform to avoid falling off the side, but there will be more than a few opportunities to get a clear shot of another vehicle, knocking it off the platform. Another fun multiplayer mode is destruction, in which each player tries to damage the other's vehicle so badly that it can't even move. The tracks in this particular mode are wide-open spaces with plenty of trenches and jumps, so--in addition to opponents--reckless driving can cause a substantial level of damage to your vehicle. Three of the five multiplayer modes--first to point, catch-up, and off-road rally--actually involve racing. In first to point, there are a series of checkpoints spread out across the track. The first driver to reach these areas gains points, and the driver who reaches the point limit first wins. Catch-up is somewhat similar in that it's basically a race to checkpoints--only you have to follow the path of the other driver if he reaches a checkpoint before you. Off-road rally is a straightforward off-road race with no strange rules attached. All of these multiplayer modes support up to four players on a LAN or TCP/IP.

Regardless of whether you're in a multiplayer or single-player mode, it should be a surprise to see just how realistic the driving is in Screamer 4x4. In most off-road racing games, you feel fairly comfortable racing at high speeds, but in this game, acceleration is not your friend. In fact, if you go past second gear in your vehicle, the chances of either spinning out or rolling the car are incredibly high, and since damage has such a dramatic impact on vehicle performance, it's easy to get knocked out of a race before it even begins. Another realistic aspect of Screamer 4x4 is the terrain itself. You're often required to find an alternate route to a particular checkpoint because your vehicle simply can't handle the terrain on the main path. Fortunately, the tutorial mode lets you adjust your driving skills so that you learn when it's a good time to accelerate, when it's better to keep it slow, and which types of terrain the vehicles can safely handle.

The development team at Clevers Software has tried to match the realism of the gameplay with realistic graphics. Each car has been modeled to look exactly like its real-life counterpart, down to the dashboard in the first-person camera view. The terrain itself looks solid with plenty of objects, such as trees, bushes, people, and an occasional barn to decorate the landscape.

Screamer 4x4 should appeal to any fan of off-road racing, and though it carries a low price tag, it has enough features to make it seem like a full-priced product. Screamer 4x4 will be available on November 12. 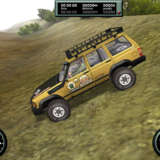