The D-Backs' Curt Shilling will appear on the cover of The 3DO Company's High Heat Baseball 2003.

The 3DO Company has signed Arizona Diamondbacks pitcher Curt Schilling as the official cover athlete for the latest game in its High Heat Baseball series. Schilling, who won the co-MVP award in the World Series, will appear on the game's packaging, and his likeness will be used to promote the game. High Heat Baseball 2003 features a variety of enhancements when compared to last year's version, including improved graphics; new modes of play such as home run derby, batting practice, and player editor; full analog controls; and a tuning menu.

High Heat Baseball 2003 will be released for the PlayStation 2, Game Boy Advance, and PC platforms in spring 2002. 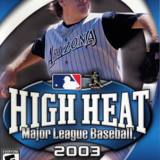