The Samurai Warriors 5 demo includes two stages and four playable characters, as well as the option to transfer progress to the full game when it launches on July 27.

Ahead of its July 27 global launch, a demo for Samurai Warriors 5 will go live on July 20 with cross-progression, publisher Koei Tecmo announced.

The Samurai Warriors 5 demo--available on Nintendo Switch, PC, PlayStation 4, and Xbox One (and presumably next-gen hardware)--is just a small vertical slice of the hack-and-slash game. It will include two stages and four playable characters, as well as transferable progress to the full game.

#SamuraiWarriors5
The demo will be going live on 7/20 on Steam/PS4/Switch/Xbox One!
Experience two stages with a choice of Hideyoshi Hashiba, No, Tokugawa Ieyasu, or Toshiie Maeda!https://t.co/b8qVw0P5Ce
**Progress can be transferred to the final game**#SW5 #KTfamily pic.twitter.com/5tXasQrrTR

No other details about the demo where provided. Some Twitter users have found workarounds to get access to the Japanese version of the demo, which is allegedly available to download. 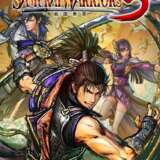