THQ's video game renditions of the Pickles family has done quite well with young audiences.

THQ has announced that retail sales for its Rugrats-licensed video games have exceeded US$100 million, which places this series among the strongest children's franchises. THQ and Nickelodeon plan to continue the successful Rugrats franchise with the release of Rugrats in Paris for the PlayStation, the Nintendo 64, and the Game Boy Color on November 17.

"Our first game developed especially for kids, Rugrats Search for Reptar for PlayStation, helped pave the way for the kids' video game market on PlayStation back in November of 1998," stated Alison Locke, executive vice president of North American publishing for THQ. "Since then, we have built a comprehensive library of children's video games that includes Scooby-Doo, Power Rangers, The Little Mermaid, as well as an extensive line of Rugrats adventures including three more for the 2000 holiday season." 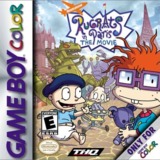 Rugrats in Paris: The Movie
Follow
$17.40 on Walmart
Buy