Series creator confirms he has no real plans to make a new entry in adventure series, but offers detailed plans for "dream" game.

Monkey Island creator Ron Gilbert has outlined a hypothetical "dream" sequel--Monkey Island 3a--though he made clear up front that this project is not in development.

"I'm just thinking and dreaming and inviting you to come along with me," he said on his blog.

Though Gilbert said he has no immediate plans to make a new Monkey Island game, he provided a detailed, 17-point outline of what such a game could look and play like. First, this game would be a fully voiced retro title that harkened back to the original Monkey Island and its first sequel, Gilbert wrote.

"I'd do it as 'enhanced low-res," he said.' "Nice crisp retro art, but augmented by the hardware we have today: parallaxing, depth of field, warm glows, etc. All the stuff we wanted to do back in 1990 but couldn't. Monkey Island deserves that. It's authentic. It doesn't need 3D."

As for why the game would be called Monkey Island 3a, Gilbert said he would rather pick up where he left off without the "baggage" of other titles in the series.

"All the games after Monkey Island 2 don't exist in my Monkey Island universe. My apologies to the all talented people who worked on them and the people who loved them, but I'd want to pick up where I left off," Gilbert said. "Free of baggage. In a carnival. That doesn't mean I won't steal some good ideas or characters from other games. I'm not above that."

The game would be a hardcore adventure title that would not feature tutorials, hint systems, "pansy-assed puzzles," or anything that caters to mass-market, he said. "It would be an adventure game for the hardcore. You're going to get stuck. You're going to be frustrated," he explained.

The game would be made by a "very small team" or 10 or fewer developers, Gilbert went on. This means creating the game would take longer, but it would be "more personal and crafted with love," he wrote.

Gilbert further explained that he would only make another new Monkey Island game if he owned the franchise. He said if he owned the intellectual property (IP), he would not only allow, but also encourage the community to create their own fan games.

If Gilbert were granted the rights to the series, he said he might use crowd-funding site Kickstarter to get the project off the ground. If this were to happen, the campaign would be "raw and honest" and would not include any "lofty promises or "ridiculous reward tiers," he said. 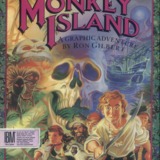