RollerCoaster Tycoon 3: Complete Edition Is A HD Upgrade, And It's Coming To Switch

2004's RollerCoaster Tycoon 3 is coming back with HD graphics and both expansions included.

RollerCoaster Tycoon 3 is coming back, with a Complete Edition release coming to PC (via both Steam and Epic) and Switch. This version of the game will feature HD graphics, although it's not necessarily a full remaster.

Both previous expansions, Soaked! and Wild!, will also be included, giving you more options for how you build up your park. The game will launch September 24, so you won't have to wait long for it.

You can check out footage in the trailer below.

In GameSpot's original review of RollerCoaster Tycoon 3, the game received a 7.8/10 verdict. "Unfortunately, RollerCoaster Tycoon 3 managed to ship with a number of glaring bugs that can make your park feel a bit lifeless, even when there are hundreds of peeps roaming about," wrote reviewer Jason Ocampo--hopefully the new version is relatively bug-free.

RollerCoaster Tycoon 3: Complete Edition isn't coming to Xbox or PlayStation, but if you want to build a theme park on those consoles, never fear--Planet Coaster is coming to PS4, PS5, Xbox One, and Xbox Series X. 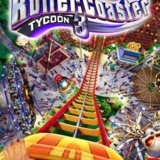