Max Payne 3 developer explains why it has adopted certain shooter trends and shunned others, and whether an open-world setting was ever a consideration.

134 Comments
Where to buy
Max Payne 3
There are no available deals for this platform
$99.99 at Walmart
$100.18 at Walmart
GameSpot may get a commission from retail offers.

For any developer looking to revive a classic franchise, there's always a challenge in looking at which parts of the series have withstood the test of time and which ones need a modern update. Rockstar has certainly found itself in just such a position when it comes to Max Payne 3. We recently spoke with Jeronimo Barrera, Rockstar's VP of product development, to see how the company has addressed those issues.

GameSpot: In your eyes, what's the one part of the third-person shooter genre that has changed most since Max Payne's last outing? How have you addressed that in Max Payne 3?

Jeronimo Barrera: Cover is something that everybody worked to adopt, and it quickly became a staple of third-person shooters. For us, the direction early on was to make sure we had a great, intuitive cover system but not make it the central or core mechanic. It's only natural when trying to build a game around gunplay that the whole environment comes into play, and it would look silly if Max couldn't assume a position behind obvious cover points. One of the goals was to make sure that AI reacted appropriately to the player if they're behind cover. If you're caught by a thug flushing you out, it can be deadly. That led to further development of the shootdodge and the ability to vault over cover in the fast and fluid manner that characterizes the Max Payne games. In the end it feels and looks great and is a totally natural progression for the series. 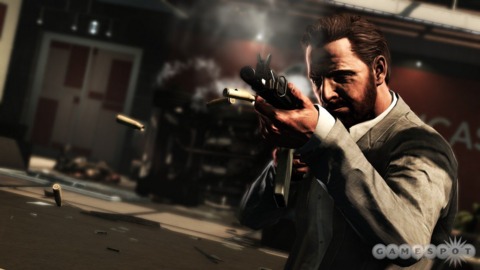 Max has always known how to handle a gun.

GS:On the other hand, one of the areas where you guys are bucking recent shooter trends is with the health system--it's not the popular regenerating health. What's the reasoning behind that particular design decision?

JB: When we set out to make Max Payne 3, we had a few specific goals--to stay true to the fundamentals of the original games in both tone and in gameplay, but also to significantly update the series for the expectations of today's players in ways that felt fresh and new. We've worked hard to make the gameplay more sophisticated than other third-person shooters in many ways, from the work done on targeting and animation to the new ways we've implemented bullet time, but painkillers are one of the fundamental elements of the series and play a major role in Max's story as well as gameplay.

We also wanted to encourage players to be strategic in their approach to combat spaces and not to rely on cover as simply a point to sit and regenerate health. Max Payne is about the beauty of the gunplay itself, in knowing when to launch yourself into an area, finding the right lines of attack, and perfecting bullet time kills. Regenerating health would have an impact on the game's natural rhythm.

"Regenerating health would have an impact on the game's natural rhythm."

GS: The first trailer shows more than a few instances of Max getting up close and personal with his enemies. While Max had a basic melee attack in Max Payne 2, how much more in-depth will hand-to-hand combat be in the next game?

JB: Max has access to new melee moves in Max Payne 3 which allow you to take down enemies in close quarters, and these are all contextual depending on the weapon you're wielding at the time and your relationship to the enemy. Max will kick lower enemies, head-butt an enemy if you don't have a weapon, or disarm opponents if you're out of ammo. Max will also make creative use of the butts of weapons to pistol-whip enemies in close for a coup de grace

GS: The Max Payne series popularized the bullet time mechanic, and for a while there it seemed like every other game was using some variation of it. What has been the biggest challenge in bringing back bullet time in a way that doesn't feel worn out?

JB: The original Max Payne game was the first time players had seen real, functional slow motion in video games, and it was visually stunning. These days, many games include some superficial form of slow-motion gameplay as one feature among many to mark off a checklist, but in the Max Payne series, bullet time is a core element of gameplay, both strategically and aesthetically. Gunplay has to be both hectic enough for bullet time to make strategic sense, and beautiful at any speed, so the entire game is built around the many ways in which bullet time is implemented.

"These days, many games include some superficial form of slow-motion gameplay as one feature among many to mark off a checklist"

Our challenge then was to make modern bullet time feel integral to the game's design, and we feel we've achieved that in the pacing and design of each level. Enemy AI can be extremely overwhelming in real time: precise, deadly, and smart, flanking, using projectiles, and flushing players out of cover if you stand still for too long. The use of skill-based multipliers to increase bullet time regeneration means the better you group your shots into vital areas, the quicker your bullet time meter will replenish, allowing you precious extra seconds to size up your next move.

We wanted to keep that same wow factor of the first time you saw bullet time, and we've achieved it through the combination of bullet time and Natural Motion's Euphoria system to power character behaviors. Every time you go into bullet time and shoot enemies, you're going to see them react differently. Another way that Euphoria upgrades Max's behavior is how aware Max is of his environment at all times, but especially during shootdodges--rather than a canned dive animation, Max will respond to the world around him as he dives, bracing for a fall with his arm or ducking his head where necessary. 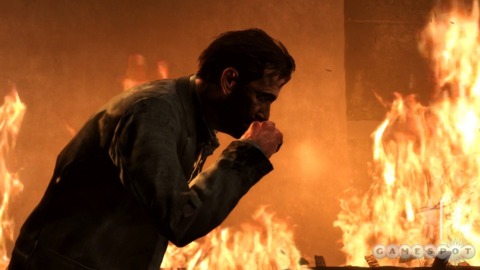 If you can't stand the heat… move to Brazil?

GS: One of the most memorable scenes from the last press demo was of Max firing shots with one hand while holding onto a moving crane hook with the other. Can you give us a sense of how frequently these cinematic moments occur?

JB: Those cinematic moments are another example of the way we've updated bullet time for Max Payne 3. There will be many points throughout the game where areas of the environment will automatically trigger bullet time in order to create these cinematic set pieces. These are not simple quick-time events--you have full control of Max as a character, with full reticle movement in order to precisely target each enemy, and you'll transition in and out of these completely seamlessly.

GS: How much have you tried to incorporate story into the gameplay? Will players get a sense of Max's personal ups and downs in the way the game plays?

Definitely. We put a lot of effort into blending story and gameplay as seamlessly as we possibly can, and Max's personal journey is at the heart of the game. Given the story-driven nature of the game, it's not easy to discuss without quickly heading into spoiler territory, but we'll be jumping around within Max's timeline in a way that will allow every twist in the story to fully reveal itself in a way that lives up to Max's journey so far.

GS: Given that Max Payne 3 is the first game in the series that Rockstar has developed in-house, did you ever consider adapting the Max Payne gameplay into the open-world style Rockstar is so well known for?

JB: Max Payne has a long, acclaimed history and is more than capable of standing alone as a third-person action shooter on its incredibly sophisticated and cinematic blend of story and gameplay, and that is the kind of game we set out to make, alongside our ambitions for competitive multiplayer within the Max series through Max Payne 3. We love our open worlds, but we have one or two other games that cover that territory for us.