In January 2008, Activision announced that the Guitar Hero franchise, purchased along with RedOctane in May 2006 for nearly $100 million, had achieved $1 billion in sales in North America. The feat came 26 months after the Harmonix Music Systems-created initial installment shipped for the PlayStation 2, and nearly three months after the Neversoft-developed Guitar Hero III made its cross-platform debut. 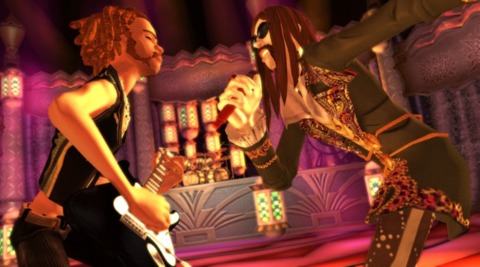 Now, the original Guitar Hero creator has struck gold twice. MTV Games said today that Harmonix's Rock Band franchise has logged in excess of $1 billion in sales in North America, according to the NPD Group. Purchased by MTV Games for $175 million in September 2006, the original Rock Band was shipped by Harmonix to rave reviews 15 months ago. Rock Band 2 made its Xbox 360 debut in September 2008, with PlayStation 3, Wii, and PlayStation 2 installments following later that year.

In addition to the sales announcement, MTV Games provided a stats breakdown of the Rock Band franchise. More than 40 million playable songs have been sold via online networks, the publisher said, noting that the Rock Band franchise was the most lucrative game across all genres in the US during 2008, according to NPD. As of March 24, 2009, Rock Band and its follow-up feature 614 total songs from 269 different artists. The publisher also said that 11 albums have now been released for the series.

MTV Games and Harmonix said in January that they do not plan on releasing a third full installment in the Rock Band franchise this year. Instead, the Cambridge, Massachusetts-based developer is at work on the "all-new" The Beatles: Rock Band, which is expected to arrive for the Xbox 360, PlayStation 3, and Wii on September 9. Rock Band: Unplugged, developed by Backbone Entertainment, is expected to arrive for the PSP later this year, along with the DLC compilation Rock Band Track Pack: Classic Rock for consoles on May 19.