A City Sleeps will launch this October for PC and Mac on Steam.

Rock Band and Dance Central creator Harmonix has announced its newest game, and it's probably not anything you expected. A City Sleeps is described as a twin-stick hardcore shoot 'em up, and it's launching this October for PC and Mac through Steam.

The game follows a female character named Poe, the youngest member of an ancient clan of "dream exorcists" known as The Silk who are charged with entering people's minds to remove dreams of demons. Poe wields a weapon called Heartstrings, and must use it to vanquish enemies and uncover secrets.

Since it's a Harmonix game, you shouldn't be surprised to learn that music is a major part of A City Sleeps. According to Harmonix, music will determine where enemies spawn, their movement, and bullet patterns. Another feature for A City Sleeps is the "Idol" system. Poe can possess inanimate objects of the dream world--idols--and then use them to her advantage. Check out the trailer above to see how the game's seemingly disparate elements are tied together.

A City Sleeps is one of a handful of in-development Harmonix projects. The studio is releasing Kinect games Dance Central Spotlight and Fantasia: Music Evolved for Xbox 360 and Xbox One this fall, while it is also at work on a new Amplitude game for PlayStation 3 and PlayStation 4. Harmonix is also working on free-to-play PC shooter Chroma, though the studio confirmed in May that it is "retooling" this game based on feedback.

On top of those projects, Harmonix announced at PAX East in April that it has "grand plans" to bring the Rock Band series back for current-generation consoles, though a new game in the once-popular music franchise has not been announced.

When A City Sleeps launches in October, it will sell for $15 until October 16 (which could be the release date) but you can preorder the game on Steam today for $12.74. A limited-edition version that includes the game's soundtrack is also available for preorder for $15.29 (normally $18). 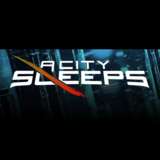