We battled robot baddies with our mighty stylus in Vogster's new real-time strategy game on the DS.

Square Enix opened the door for real-time strategy on the Nintendo DS last year with Heroes of Mana and Final Fantasy XII: Revenant Wings, both of which used the handheld's touch-screen control to good effect but lacked certain trappings we've come to expect from the RTS genre. Now Vogster's new game Robocalypse is on the way, and judging by a brief hands-on session with an alpha version of the game recently, it looks like this may be the most complete RTS-style game the DS has seen yet.

The game's premise is silly enough: There's an army of evil robots loose and bent on world destruction. Thing is, there was a little mishap down at the factory where these combat-ready droids were stamped out. These military-minded robots' artificial-intelligence routines got crossed with those of their manufacturers' popular line of self-aware kitchen appliances, so although they may be looking to flatten the human race into a big, greasy pancake, they'll do so with the utmost politeness. You'll take control of an army of benevolent battle 'bots whose AI was similarly crossed with the brains of some World War II vets who happened to be visiting the factory at an opportune time. So in addition to bringing capable robotic-fighting skills to bear, your own army will exhibit a tendency to talk tough and chomp on cigars. Some human clichés, including the buxom blonde scientist, her bespectacled brainiac research companion, and a square-jawed government agent, will also help advance the storyline.

Heroes of Mana and Revenant Wings were heavy on the micromanagement of units and combat activities but light-to-nonexistent on other RTS elements such as base building. Robocalypse amps things up in this area, and as such you'll build structures that can produce different kinds of units. You'll also create worker units to collect scrap and energy, the two kinds of currency. (Thankfully, the drones will gather resources automatically.) The controls are of course mainly stylus-driven; you can scroll the screen by dragging, queue up units for production with a couple of building taps, and so on. There's even a handy feature to flip the map from the top screen down to the bottom, quickly drag to a new point on the battlefield, and jump back to the action.

You'll have a number of nameless combat-robot types that you can pump out by the truckload, given that the game supports about 50 units onscreen at once. But you won't have to micromanage those units, point-and-click-style. Instead, Robocalypse makes use of action flags, which you can plop down on the field to give all of your units a general direction, such as "defend here" or "attack those enemies." This is simply to keep you from having to select individual robots, or even groups of units, and issue them orders individually. The game's AI will instead control your forces sensibly according to the flags you've put down, which theoretically will let you concentrate on the greater strategy.

The one exception to this rule is your hero units, of which the good-guy robots have six types. You can give orders directly to your hero units because they have specific abilities you'll need in various circumstances. For instance, you've got the scout, who can turn invisible to spy on the enemy and can plant fake action flags to confuse opposing troops. We saw another hero unit who was a larger, burlier, combat-oriented guy. He could unleash heavy fire with a massive machine gun, and also call troops to him to act as a squad that could move around as one unit. You'll be able to upgrade your heroes between missions, but we didn't get to see this feature in action.

The version of Robocalypse we played was still early--with a number of missing sound effects and some placeholder cinematics, for example--so it's hard to predict what the game's final presentational quality will be like. But the core gameplay fundamentals here looked solid in our brief experience, so if the 17-mission campaign and versus modes shape up well, this looks like one for strategy fans to watch when it ships in the second quarter. 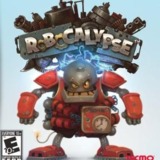