It wasn't long after the introduction of the first automobile, relatively speaking, that the roadster or the hot rod made its appearance. The 1932 Ford Deuce, is considered one of the definitive hot rods, (with Ford's first production V-8 engine), and no matter how old you are, you probably remember the Beach Boys crooning about the Little Deuce Coupe. Titus announced Roadsters 99 for the N64 last year, and now LA-based developer Player 1 is working on Titus' Roadsters for the Dreamcast.

We haven't exactly seen any Deuces in the screenshots, but what we have seen looks pretty good, even at this early stage. First of all, the N64 and Dreamcast games will be quite different from each other. The Dreamcast title, according to Player 1, will offer more arcade-style play over Roadsters 99. Essentially, the surface differences are: the N64 version will have pit stops, the Dreamcast game won't; the N64 game will have gambling as a gameplay function, and the Dreamcast version won't; and there will be fewer cars in the Dreamcast game - a total of 12 - with some hidden, while the N64 version will have 15 but will count various paint jobs as different "cars" entirely.

Roadsters for the DC will have about eight tracks with four different themes. These themes will be based in different terrestrial environments, such as "desert." Within each theme, there will be tracks you must beat to get to the next one. For example, if the desert theme has Desert A, Desert B, Desert C, and so on, you must beat Desert A to go through a barrier or access a shortcut you might find in Desert B. This is not to say each track within a theme is the same as the track before it; this is just to say that the tracks extend into one another and that your skill level on the various tracks affects your freedom and accessibility in the next one.

In gameplay, Roadsters for the Dreamcast sounds as though it will also be more complicated than the N64 version. The courses will include lots of crazy jumps and turns. The developers have turned a keen eye toward more aggressive and unpredictable track design. Hidden tracks? Perhaps. It's too early for Player 1 to say, but it is possible.

There will be three basic modes of play: arcade, trophy, and multiplayer. While we've pretty much explained the arcade mode, the trophy mode will consist of selecting a car and driver to begin your game. Your choice of driver is limited to one of four male or female characters none of whom will apparently have any impact on how you drive, so their purpose is aesthetic only. As you race (up to seven others, minimum, and still to be determined), you'll earn money to upgrade your vehicles. The type of car upgrades will be Street, Sports, and Formula. There will be noticeable car handling upgrades on each, yet visually, you'll only notice the upgrade on the Formula version. And you won't be able to upgrade piecemeal. You'll have to buy and sell entire vehicles (you'll have a garage in which to store your cars), not kits. Another note is that you'll have to unlock the courses in trophy mode before you can play them in arcade mode. There's incentive.

In multiplayer mode, you'll be able to play against three others; however, you won't be able to play combinations of human/CPU at this point. Player 1 says the AI will be wise enough to knock you off the road and block your pass through.

Graphically, the game will use a replay-style camera or trick camera, with a couple different views: in cab and behind the car, between which you can switch back and forth during play. But perhaps the most interesting graphical element is one that actually affects gameplay. Each track will have environmental or natural elements that will attempt to throw you off course. For example, on the Area 51 track, a large tornado will appear onscreen and not only create a visual stir, but will mess up your driving by putting debris on the track or sending you off course. Player 1 is still working on incorporating this into the gameplay but is optimistic that we'll see this treatment in the final product. Other effects include rain, a volcano, and an earthquake that will also make structures and objects block your path and force you to continue racing while avoiding these obstacles.

Player 1 and Titus haven't announced any official licenses yet, but that is a possibility. As far as the VMU (VMS in Japan) is concerned, there won't be any minigames available, but you will be able to store basic car info and stats.

Roadsters for the Dreamcast has not been given a firm release date, but keep watching this space for details as they emerge. 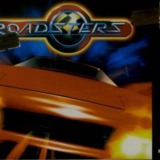