We now have a better idea of when we can expect to get back to taking names and throwing hands in the stylish beat-'em-up.

Developer WayForward has confirmed that the next entry in the River City Girls series, River City Girls 2, is headed to Nintendo Switch in Summer 2022. The news was announced as a part of Nintendo's Indie World Showcase, which took place on December 15, 2021 and offered a first look at a handful of some seriously fun-looking upcoming titles as well as plenty of Switch port reveals.

Set out on an all-new RPG-infused beat-'em-up adventure and take back the city when River City Girls 2 by @WayForward comes to #NintendoSwitch in Summer 2022! #IndieWorld pic.twitter.com/fQsyEQd7r8

The follow-up to 2019's River City Girls, River City Girls 2 follows veteran brawlers Misako, Kyoko, Kunio, and Riki as they traverse the vibrant metropolis of River City, and promises an "all-new adventure" with everything people loved from the first game. In addition to the usual crew, two new playable characters are also joining the fray, making for a total of six fighters to choose from. Just like its predecessor, you'll be able to see these characters in action together thanks to the series' cooperative mode. However, whereas River City Girls only had local co-op, you and a friend can now take to streets from anywhere in the world thanks to the new online mode.

Alongside the new characters also come new combos, techniques, and even better customization via upgradable movesets. Players will then be able to test all these moves out on a much larger map featuring new locations as well as a new soundtrack by original composer Megan McDuffee.

Last but certainly not least, back when River City Girls 2 was announced during 2021's Limited Run Games' E3 presentation, our first look at the game revealed art of a character strongly resembling Double Dragon's Marian Kelly, who appeared in River City Girls as the owner of an accessory shop called Swaggage. Based on what we've seen of the sequel thus far, it could be Kelly is making her way from hapless damsel in distress to seriously shredded street fighter, and will be joining the game as one of its six playable characters. 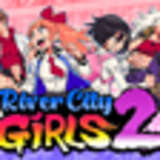