We take our first look at Piranha Bytes' sequel to Risen and the spiritual successor to the Gothic series.

If there's a better reason to attend the 2011 Game Developers Conference than the opportunity to take a first look at Gothic developer Piranha Bytes' role-playing sequel Risen 2: Dark Waters, we don't want to hear it. This sequel takes the high-fantasy world of Risen, which took place on a besieged island, and will become a full-on, full-fledged, full-featured, full-monty pirate role-playing game, where you play not only as Piranha Bytes' established "Hero" character, but also as a seafaring adventurer in a fantastic age of sail.

Risen 2 takes place some in-game years after the events in the first game. Specifically, the Hero has vanquished the powerful titan monster that threatened his island home after first defeating the evil inquisitor and claiming the villain's magical eyepatch--an artifact that let the Hero identify the titan for what it was--a malevolent creature disguised as a natural disaster. Unfortunately, bigger problems are afoot--other titans are awakening near other islands in the area, and worse yet, hideous sea monsters have emerged from the deep, completely disrupting trade routes and generally causing the few survivors who exist in the world to be very, very grumpy.

And as it turns out, the Hero is the grumpiest of all. In a first for a Piranha Bytes game, the Hero does not suffer from amnesia and does remember his hard-fought battles and narrow escapes perfectly well, thank you very much. However, his cool reception by an unappreciative populace has made him bitter and frustrated, though he still seeks to save the world by finding some means to rescue the other islands from their impending doom.

While we took our first look at the game during a hands-off demonstration session, Piranha Bytes representatives took a great deal of time to address the specific complaints from Risen's fan community, including bland-looking character models, flat-looking environment textures, a lack of variety in enemies to fight, and technical problems in the console versions. The studio is addressing every single one of these concerns by creating highly detailed character models with varied animations and modular apparel that can be more easily mixed and matched, enhanced environment texturing that makes the environments seem much more realistic, simultaneous PC and console development to ensure all versions of the game are created in lockstep, and lots of new enemies to populate the islands.

Yes, islands. While the first game took place on a single landmass, Risen 2 will take place across a series of different islands. The developer isn't commenting on exactly how your swashbuckling pirate Hero will make his way between these beleaguered areas, but given that Piranha Bytes suggests that the game will be "the perfect pirate RPG," it's not hard to guess how you'll be getting from point A to point B. And you won't be going it alone, either; like in Risen, you will from time to time have companions join your side. At least one of the companions will be a mysterious woman practiced in the dreaded art of voodoo magic. This character appears in one of the game's early video trailers and rescues the Hero by means of a voodoo doll and a lit match, just as he's about to be finished off by a group of attackers.

We then took a brief look at a pre-alpha version of the game in motion and found it to already look considerably better than the previous game. In addition to featuring beautiful water effects (which allow for underwater vegetation and darting schools of fish), Risen 2's environments seem highly detailed and will be populated by townspeople who have their own daily schedules and tasks that they'll attend to whether or not you happen to be in the area.

The game is still very early in development but already looks extremely promising. Risen 2 will offer better graphics, a bigger world, and an all-new story. The game will be released later this year. 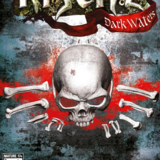