An internet joke about Nintendo's strange limited-time sales tactics has turned into a meme about Mario's public execution.

Mario died on March 31, 2021. At least, that's what large swaths of the internet are saying, thanks to a meme that has taken hold around Nintendo's sales practices. Depending on how closely you've been following the Mario 35th Anniversary celebration, you may be confused about why some people are talking about Nintendo killing off one of its most iconic characters. Here's what's going on.

Why is Mario dying?

The short answer is: He isn't. Mario isn't going anywhere, and Nintendo has already announced Mario games that will release in the coming months like Mario Golf: Super Rush. Obviously Nintendo wouldn't actually get rid of one of its most popular and recognizable characters, so we'll be seeing Mario in games for a while to come.

The longer answer is that while Mario probably isn't going anywhere, some of his games definitely are. And that's really where this snowballing joke began picking up momentum.

But unlike Tetris 99, Super Mario Bros. 35 came with an expiration date. So did Mario 3D All-Stars, the Game & Watch, and even other pieces of anniversary Mario merch. Nintendo declared that all of these would be pulled from shops on March 31. And the company seems committed, even indicating it intends to pull physical copies of Super Mario 3D All-Stars from shelves and the eShop. There's no word on what the company will do with remaining retail copies that go unsold.

Retailers reportedly still have plenty of stock left, and they're unlikely to pull them from shelves regardless of Nintendo's limited-time plan. But once those copies run out, they won't come back, and Nintendo has pulled the games from its digital store. While Super Mario 3D All-Stars owners can still play their copies, Super Mario 35 is unplayable now that its server support has been shut off.

Why is Nintendo doing this?

"Super Mario 3D All-Stars has sold over 2.6 million in the US alone," Bowser added. "And so clearly, consumers have been able to jump in and enjoy that. And it's not a strategy that we're going to be using widely, but it's one we thought was very unique for the actual anniversary."

Thank you to everyone who joined us in commemorating the 35th anniversary of Super Mario Bros. We hope you continue to Power-Up and enjoy Mario and friends’ adventures! #SuperMario35 pic.twitter.com/gwZDUaXiSF

There has been speculation and criticism among some fans that the limited-time offer is to push artificial scarcity. There's no indication that's an intentional move on Nintendo's part, but intended or not it seems to be working. GamesIndustry.biz reports that sales of Mario 3D All-Stars have spiked in its final week on the market, according to UK sales charts. Some fans are clearly concerned that they wouldn't get another chance.

Fans have also speculated that Nintendo may bring these games back, in a new context removed from the Mario 35th anniversary. That could mean offering the 3D All-Stars games individually on the eShop, for example, making the compilation package itself the anniversary exclusive.

Regardless of what happens next, the internet dubbed the date as Mario's public execution. Partly to poke fun at Nintendo for the harsh move of killing off games that customers might want, this has been designated as the day Mario dies. And while he isn't really going anywhere, the memes continue.

Everyone's talking about how Mario dies today, but no one remembers that he actually died in 2003 pic.twitter.com/kCTCnA1f1U 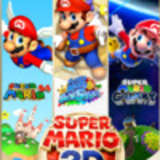