Hit downhill trails and some fresh powder without having to worry about broken bones in Rider's Republic, which just got its biggest Black Friday discount yet.

As part of its Black Friday deals, Walmart, Amazon, and GameStop have dropped the price on Ubisoft's extreme sports sandbox Rider's Republic to just $25. You can grab Riders Republic for $30 at Best Buy in case it sells out at those retailers. Considering that the game is only a few weeks old, that's a huge discount and the biggest you'll see for quite a while on the game once the special is over.

In case you missed out on it, Rider's Republic drops you as a fresh-faced participant in an event where the sky is the limit. Quite literally, as even jet turbine-powered wingsuits can only take you so far.

If the most extreme form of air travel isn't to your liking, you can stay mostly on the ground with various other sporting disciplines, such as mountain biking, snowboarding, and an exercise bicycle. No, really this is a thing.

"Riders Republic is a thrilling, approachable, and incredibly varied extreme sports game, featuring an awe-inspiring open world that impresses with both its scale and diversity," critic Richard Wakeling wrote in his Rider's Republic review. "There's nothing else quite like it, and while it's too talkative for its own good, there's a sprightly energy to the whole thing that makes it easy to recommend for anyone seeking an exciting adventure." 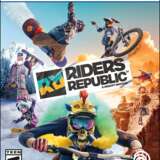