Travel across surreal soundscapes and enter into symphonic showdowns in the follow-up to 2017's Figment.

Bedtime Digital's Figment 2: Creed Valley, the follow-up to the 2017 cerebral, action-adventure game Figment, is coming to Nintendo Switch. The studio shared the news during Nintendo's Indie World Showcase on December 15, offering fans a closer look at the surreal and humorous game as well as a tentative release window: February 2022.

It's official, Figment 2: Creed Valley is coming to Nintendo Switch early next year!!

Set after the events of Figment, Figment 2 follows protagonist Dusty and his sidekick Piper as the pair navigate their way through a human psyche overrun by nightmares and fear. Together, the duo must solve mind-bending puzzles in an attempt to restore the mind's "moral compass" and get it up and running properly. Set throughout various realms of the mind and filled with strange, manipulable environments that require clever thinking--or a good co-op partner--the game is reminiscent of Psychonauts albeit with a slight twist.

While the game might offer up quite the visual treat with its vibrant colors and surreal design, where Figment 2: Creed Valley seems to be striving to shine is with its music and sound design. According to the Indie World Showcase, Bedtime Digital poured a lot of love into creating the game's sound, using random household items and smashing things--such as grills and coffee kettles--to create the noises that fill the title. Despite the Bedtime Digitial being a Danish studio, Figment 2: Creed Valley also boasts a somewhat Americana-sounding soundtrack, accompanied by several musical numbers scattered throughout it. These musical numbers ultimately take center stage during the game's boss fights, as each big baddie has their own unique song that explains their motivations while also taunting the player.

Figment 2: Creed Valley is slated to hit the Nintendo Switch in February 2022, though those eager to get their hands on it sooner can check out a demo later today on the eShop. 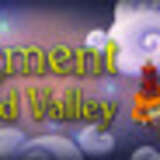