2013 cult classic The Stanley Parable is seeing new life this year, with a remastered and extended version called The Stanley Parable: Ultra Deluxe releasing for modern consoles on April 27. Whether you're a big fan of the original, or just thinking about checking out The Stanley Parable for the first time, here's a look at what critics think of the game so far.

In GameSpot's review of Ultra Deluxe, reviewer Jordan Ramée scored the re-release an 8/10, referring to it as "a sequel in all but name," praising the game's new endings and how it's been updated as a commentary on the games industry of today.

With reviews split between various release platforms, GameSpot sister site Metacritic doesn't yet have a aggregate score for any edition of The Stanley Parable: Ultra Deluxe, but early reviews seem overwhelmingly positive.

"Ultra Deluxe is as intriguing to play as the original game, perhaps even more so today given that its message is directed toward the modern-day gaming landscape. Some of the nuances will be a bit lost on you if you weren't playing games or at least paying attention to the space back in 2013, as it relies on having a grasp of how the conversation surrounding games has evolved in the past decade. But, it's an entertaining experience regardless of if you have that context or not." -- Jordan Ramée [Full review]

"Given how many secret paths and hidden endings The Stanley Parable contains, it’s hard to tell exactly how big the new content in Ultra Deluxe really is, but I feel confident saying it's comparable to the original with four to six hours of stuff to see at the very least. There is essentially an entirely new game to play through here, and the idea that it’s being presented as anything less is probably one of its best gags. Some of Ultra Deluxe's content takes place in brand-new areas that pretty much feel like a straight up sequel, while other additions play out as remixed or altered versions of Stanley’s usual paths through the office." -- Tom Marks [Full review]

"A thoroughly enjoyable expansion of an already classic game treated with love, care, and most importantly a meta awareness that pays tribute to everything that made The Stanley Parable so beloved. It may leave a small few questioning more than they'd like, but we wouldn’t want it any other way." -- Alex Olney [Full review]

"Once again, stepping into Stanley's shoes turns the act of playing a game into a hilarious, surprising, and at times deeply thoughtful examination of games and game development, players and player choice, and yes, even the consequences of pushing a button." -- Christopher Livingston [Full review]

"Whatever voice you need to hear it in—first, second, third, or eveneighth—I strongly urge you to partake in the joy that isTSP:UD. The original game's plot and decisions have arguably lost some of their edge due to time andother media playing with similar jokes, and the game's pacing feels slow this many years later. But it still holds fun and surprises for new players. For series vets, the newUltra Deluxegags and plot twists riff on the originalTSP, the entire game industry, and a bunch of silly stuff in between, all while eliciting laughs so big that neighbors tapped on my door in concern during my testing period." -- Sam Machkovech [Full review] 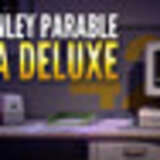