Here's what critics are saying about the new game from the makers of Hyper Light Drifter.

Solar Ash is out tomorrow, December 2, and finally answers the question: What would happen if Shadow of the Colossus starred Shadow the Hedgehog? While it doesn’t actually feature Sonic’s frenemy with the Hot Topic color scheme, Solar Ash is fast, frenetic, and stars a character on sci-fi roller skates, so you get the idea.

Heart Machine’s follow-up to Hyper Light Drifter is a major departure from their 2016 indie gem, eschewing tough-as-nails 2D combat in favor of fast and fluid cinematic action. Does it work? Well, critics mostly seem to like it, though some have more serious reservations than others.

In our Solar Ash review (by yours truly), I praised the game’s boss battles, puzzles, and exploration, but took issue with the way Solar Ash doled out its story.

For an even more detailed look, check out GameSpot sister site Metacritic.

“Much of what you see in Solar Ash makes little sense, but you move through it so quickly, the boss battles you fight are so exhilarating, and the puzzles you solve to reach them are so satisfying, that the dream logic of this world's construction feels like the necessarily slight distance to keep the good times rolling as you move from Point A to Point B.” - Andrew King [Full review]

“Solar Ash is a highly original open-plan platform game. A slim move set that rewards momentum is the perfect means of exploring its swirling, broken landscapes and executing its more exacting challenges. While some of its elements feel overly simple, that doesn’t detract hugely from a clinically focused and fresh experience.” - Jon Bailes [Full review]

“Solar Ash took me a little over seven hours to beat on normal difficulty, and while some of the anomalies and bosses were less entertaining than others, and there were moments of frustration with the controls, this was a world I enjoyed spending time in. This game may take place in a ruinous void, but its clean yet vibrant visual design is full of life, as is the story that ultimately gives Rei’s journey meaning.” - Cam Shea [Full review]

“Solar Ash deserves props for its world design, the fluidity of movement when you're in the groove, and the sense of scale on display, so it's somewhat painful to be down on it to the degree I am. It's not far from being a bit special, the kind of indie gem that everyone has to play, but it's unfortunately just not quite there. There's still a great deal of fun to be had here, and your mileage with the mechanics might be better, but for me Solar Ash is so focused on delivering flow, it forgot that you don't want to go on the same walk every day.” - Tom Orry [Full review]

“This glorious game about movement and adventure also feels like a rumination on something deeper and more personal… What makes Solar Ash special, I think, is the fact that all these semi-familiar parts are filtered through a deeper set of influences that feel like entirely personal preoccupations - so personal that I'm not entirely sure they belong to the game and its designers or to me, the player, and I have just imagined them. I glimpse it, though, this deeper, richer game hiding inside the familiar one, moving around, stretching itself in confines. I glimpse it in the way a twist of rideable cloud will arc up overheard like a thickly myelinated nerve, or in the way the searing Icarus heroism of the Vangelis-tinged theme gives way to the alien burble and thud of human homeostasis on the soundtrack.” - Christian Donlan [Full review]

“Solar Ash offers a collection of promising concepts that don’t quite hit realization. While undoubtedly a visually striking experience, Rei’s journey into the Ultravoid suffers due to a disengaging narrative and repetitious gameplay. Solar Ash’s attractive world struggles to provide the player with captivating experiences. The elements do occasionally come together, however, ensuring that while Solar Ash isn’t quite the adventure it might have been, it successfully retains unmistakable Heart Machine charm.” - Chris Moyse [Full review]

“All in all, Solar Ash is an amazing meditation on isolation and the fear of losing your planet along with everyone on it. It has some of the best, most buoyant movement I’ve felt this year in games, making me want to go buy some rollerblades and start a new life. Solar Ash sits at a comfortable length of time to beat while containing myriad strengths. From its larger-than-life score to its medley of planets and explorable biomes, it takes large leaps to tell a story of destruction and coping. After completing it, I felt a deep loss — one that sticks with me and makes me want to push hard toward a brighter future with a newfound urgency.” - Fūnk-é Joseph [Full review] 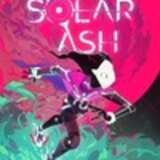