Nintendo Switch Sports is the Wii Sports sequel none of us saw coming more than a decade and a half later. Here's what critics are saying.

Sixteen years after Wii Sports made its rousing debut, the Switch is getting its own iteration in the form of Nintendo Switch Sports on April 29. Complete with both new and returning games, the sports compilation seems to be promising a similar casual experience to enjoy with friends all these years later. Reviews have begun rolling in and critics seem to mostly agree on the game's promising but slightly uneven quality, and how much fun it is with others rather than oneself.

For GameSpot's Nintendo Switch Sports review-in-progress, reviewer Kurt Indovina scored the game 7/10, sharing that while he doesn't feel it innovates like the original title did, it did recapture the spirit of Wii Sports. The fun of playing these games locally (since online has not been available for reviewers) was enough to remind him of the good old days. "After all these years, it's easy to associate Wii Sports most with its popularization of motion controls in gaming, but its greatest achievement may actually be that even after 16 years, its core gameplay design is a potent reminder how much fun simple games with friends can be. I didn't realize how much I needed a Wii Sports-like experience in my life, until playing Nintendo Switch Sports."

Nintendo Switch Sports is currently sitting at a very respectable 75 on Metacritic, placing it just a hair below Wii Sports' own 76, which could very well be a fortuitous sign. Of course, most reviews are currently in progress pending reviewers ability to test out the online components and are subject to change after the launch of the game in a few days.

If you're looking for even more perspectives on Nintendo Switch Sports, we've got excerpts of other reviews you can check out, or you can visit GameSpot's sister site, Metacritic, for a collection of scores from around the industry.

"Nintendo Switch Sports is, at its core, the same as Wii Sports was all those years ago: a game in which you swing your arms around and reenact a sport. If you're a Wii Sports (and Wii Sports Resort) veteran, the feeling of tennis, bowling, or chambara (sword fighting) will be second nature. Even with the addition of new sports like volleyball and soccer, there's very little innovation in what Switch Sports attempts to do, and I think that's a good thing. The game doesn't feel like it's trying to revitalize a trend. Instead, it recaptures the simplicity of the original and, in doing so, rekindles the same magic. It's straightforward, unadulterated, and, above all, approachable." -- Kurt Indovina [Full review]

"This game is a blast with other people, whether they love video games or, like my spouse, have no interest whatsoever. It captures that feeling of the Wii at its best: that you could pretend to be a great tennis player in your living room, and the motion controls would make you feel like you actually were. Are the motion controls as precise as the Wii Motion Plus? I don’t think so. A handful of times the game didn’t register my immaculate bowling motion, prompting me to try again. Still, I don’t think 99% of the people who play this game will think about that slight loss of precision when they’re spiking a volleyball into their friend’s face." -- Chris Plante [Full review]

"Nintendo Switch Sports, like Wii Sports and Wii Sports Resort before it, is best played as a party game, broken out for any gathering that needs a quick injection of goofy, active fun. While its sparse mixture of old and new sports varies in quality, Switch Sports largely sticks the landing on what made its predecessors memorable: intuitive motion controls, the ability to effortlessly get a group of people up and moving, and some killer menu music that’s liable to get stuck in your head all day. Just don’t expect to spend a whole lot of time with it before the novelty wears off." -- Colin Stevens [Full review]

"So while nostalgia can get you so far, Switch Sports' entire success really does hinge on your access to other players. While Switch Sports is fun for a while solo, it lacks incentives to carry on playing beyond just enjoying yourself, and the lack of variety to the locations you play in doesn't help." -- Sam Loveridge [Full review]

"Overall, Switch Sports is a blast to play. I expect it will undoubtedly rival other popular Nintendo party games like Mario Kart and Smash Bros. Ultimate, among many others. However, the limited selection of activities doesn’t hold a candle to the titles mentioned above. Moreover, no incentives exist for casual players looking to feel a sense of accomplishment playing by themselves or with family/friends. Nevertheless, I’m excited to dive into Premier League when the game drops on April 29 and hope the unlockables make up for the repetitiveness of the gameplay loop." -- Jason Guisao [Full review]

"Nintendo Switch Sports brings a beloved series onto modern platforms with aplomb. Though some minigames are slightly weaker than others, some impressive standouts – namely Chambara and Football – deliver an exceptionally good time." -- Andy Brown [Full review]

"Intuitive, responsive motion controls successfully recapture the easygoing magic of the Wii’s heyday, and will likely make Switch Sports a family game night staple and chart-topper for years to come. That said, the experience is held back slightly by the absence of golf at launch and a lack of accessibility options. (We know updates will address the former in the coming months — the latter is less certain.) Still, Switch Sports is a fun, low-key way to make silly memories with your friends and loved ones." -- Jen Glennon [Full review]

"Nintendo Switch Sports is exactly what it needs to be. It’s an intuitive package of Wii-era sports minigames with more precise motion controls and full online integration. Addictive activities like bowling and badminton make it one of the Switch’s best multiplayer party games, though overly complicated minigames like soccer miss the simple appeal of the series. With long-term support planned, I’m hopeful that Nintendo can build up the currently thin offering and turn it into the kind of console staple that any Switch owner needs to have installed." -- Giovanni Colantonio [Full review] 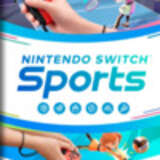