Eidos' Revenant is a Cinematix-developed adventure RPG that has clearly looked to Blizzard's Diablo for a pedagogue. The environments are dark, chaotic, and loaded with beasts, and you are a man with a mission as you ward off loads of enemies.

The game takes place in a world that sounds more like a grunt than a geographical location: Ur. In the single-player game, you play as Locke D'Averam, a warrior who's summoned from the dead by Tendrik, the ruler of the Ur island of Ahkuilon. Tendrik's daughter Andria has been kidnapped, and it becomes your duty to find her, return her, and avenge her, all under the auspices of your new master, Tendrik. You won't have full, human faculties however, as you're a revenant: a living, breathing being with the intellect and physical attributes of man, without the emotions or feelings.

The kidnapping is part of a larger story. Andria has been captured by a group of priests who've taken over Ahkuilon Island. The religion they implemented was viewed as odd but innocuous, until now. The priests, who answer to a leader named Jahga, appear throughout the game in different-colored robes that reflect their class. You have to learn which specific tools or strengths to use in order to overcome the different classes. Over the course of the game you'll discover how this cult gained its stronghold. Obviously, this priesthood has something to do with Andria. It's your job to find out exactly what that is.

There are about six different locations you'll travel to on Ahkuilon, through night and day scenarios that simulate the actual passage of time. These include a forest, the caves, ruins, catacombs, Arakna Island (off the south end of Ahkuilon), and Misthaven.

Your character is decked out from the beginning in clothes that function as armor (a shirt, pants, and boots of varying degrees of durability), and he carries weapons, magic spells, a scroll, and several talismans. As you progress, you learn how to best use the tools you have as well as pick up others along the way. Many of the 40 unique NPCs give you spell talismans and other items.

Some of the beasts you will encounter include: hoppers, lizard/frog hybrids with sharp teeth and solid leaping skills; ogroks, fiercely strong creatures that work for the priests and are terribly stupid; and wraiths, ancient Ahkuilonians who have been turned into roaming undead. There are also Arakna giant spiders, dragons, and quite a few other monsters.

Revenant's single-player game already exhibits an intuitive interface, including the item-management menu, which is attractive and uncluttered. You begin the game standing before Tendrik and his advisor, Sardok. You are given options as to how you wish to communicate with them (and this modus operandi exists between you and most of the NPCs throughout the game). Your answers break down to a few essential forms: rejecting what you've been asked or told, asking for more information, or accepting what you've been asked or told. In many cases, asking for more information will pay off, but rejecting what you've been told will just lead you to eventually comply and accept what you've been told anyway. Life's rough for revenants in Ur.

The combat system in Revenant is real-time and weapon/spell based. When an enemy appears, he or she will immediately attack you, sparking a fight. You are able to strike opponents with single or combo attacks from your weapon, use spells to unhinge them, or avoid them entirely by blocking or leaping from their charges.

Forces of nature, or talismans, give you the ability to use magic spells, but you have to understand these elements to do so. On Ur, these forces consist of the sun, stars, ocean, earth (the dirt, not the planet), moon, sky, soul, life, ward, law, chaos, and death. When these talismans are combined and used, magic effects are concocted.

Real-time battle sequences and interaction with other characters aren't the only chores in Revenant. The game also includes puzzle solving, such as hitting switches and finding clues scattered around the environments that will help you gain entry to places or uncover items.

The multiplayer Revenant lets you play up to three others over modem, LAN, or on Mplayer with several multiplayer-only characters other than Locke D'Averam. They are Bayne "Ironhand" Van Gellan, Navarro De Vray Al Xace, and Morganna Niedra Castillian. Each of these characters has different attributes, which you can learn to use to your benefit in battle.

A near-final build of the game displayed the type of environments you would expect to see from an otherworldly adventure. They're dark, yet on a high-end video card they offer pretty charming lighting effects, such as lights bouncing off walls, items, and even your sword. The fight scenes are enhanced by the added benefit of motion capture and are quite manageable in terms of controls and cameras. 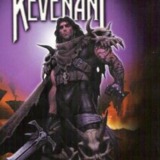