Revamped Rogue Warrior due in Q4, Rourke enlisted for lead

Like the Navy SEALs it portrays, Rogue Warrior has been hidden from view since it was announced in 2006. It turns out there was a good reason for its being off the radar. Bethesda has confirmed that the game on display at a recent event is completely different from the version initially shown to the press three years ago. Its original developer, Zombie Studios (Shadow Ops: Red Mercury, Saw), is no longer involved with the project, with all its work being completely scrapped in 2008.

Besides receiving a new developer, Rogue Warrior also got a release window today. The game will be simultaneously released for the PC, Xbox 360, and PlayStation 3 in the fourth quarter of 2009, shortly after Bethesda releases another action title, Wet. Reps for the traditionally role-playing-game-focused studio said the two games' launches would not conflict with each another.

Bethesda also announced today that Oscar-nominated actor Mickey Rourke (pictured - The Wrestler, Angel Heart) will voice the game's hero, Navy SEAL Richard "Demo Dick" Marcinko. Rogue Warrior is based on the real-life Marcinko's novels and will follow a SEAL team into North Korea, where their attempt to sabotage an ICBM program uncovers a greater conspiracy tracing back to Russia.

For more on Rebellion's development of Rogue Warrior and Rourke's involvement with the game, watch the GameSpot video interview below. 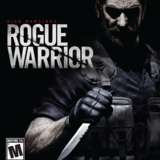