The mode will also be available to all NHL 21 players sometime later.

NHL 94 Rewind, the retro-inspired hockey game mode that takes the current NHL roster and throws them into the trappings of NHL 94 but with modern controls, is now available for those who preordered NHL 21 on PlayStation 4 or Xbox One.

NHL 21 launched on October 16, and those who preordered can now take their skills into the retro-styled throwback mode. All current NHL players will take on 16-bit styled graphics while retaining the controls featured in the main NHL 21 game.

Publisher EA said that those who missed the preorder period but still want NHL 94 Rewind can get the mode sometime this holiday. An exact release date has not been announced yet. EA said more details on how to get NHL 94 Rewind will be revealed in "early December."

A next-gen version of NHL 21 is not happening but EA said that the hockey simulator will still be playable on PlayStation 5 and Xbox Series S / Series X thanks to backwards compatibility. We'll likely see the first next-gen versions of the games next year. EA has typically also supported previous console generations for a few years after their successors released.

NHL 21 is out now on PlayStation 4 and Xbox One. We scored it a 9/10 in our NHL 21 review, with editor Eddie Makuch saying, "NHL 21 is a fantastic ice hockey game that pushes the series forward with an enjoyable, engaging story mode in Be A Pro and a flashy, arcade-style way to play with HUT Rush." 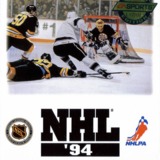