The game is also coming to PAX West, where you can get a free pin for it.

A sequel to the Kickstarter-funded Starr Mazer, Starr Mazer: DSP, launched today on PC through Steam Early Access. Not only that, but GameSpot has an exclusive song from the game you can listen to.

DSP is a retro-looking shoot-em-up that features nine stages. Developer Playism said the game is no walk in the park, as it will put "even the most veteran shmup player through their paces."

In terms of story, you are humanity's last hope. You command a fleet of experimental spaceships, DSP MkI Forward Assault Fighters, and must take down lots of evil aliens who are trying to destroy the world.

As you can hear in the track posted below, DSP's soundtrack makes use of chiptune music that moves at a fast pace with a lot of intensity. The music was composed by Alex Mauer.

DSP is available on Steam Early Access now for $9, after a 10 percent discount that's good until September 1. Like other Early Access games, it is not feature-complete and Playism is releasing it this way so it can gather feedback to make the final game better. Only three of the promised nine stages are currently available.

The game will stay in Early Access until March 2017 at the latest. The final version will include the remaining stages, as well as more pilots, bosses, weapons, enemies, and more, Playism said. Some games get more expensive after an Early Access period, but DSP's will stay the same.

If you backed Starr Mazer on Kickstarter, you can get DSP for 50 percent off by completing this form, the developers announced in a Kickstarter update. Additionally, the game will be featured in the Playism booth at PAX West next month; you can get a free DSP pin if you stop by.

As for Starr Mazer itself, the game remains in development and is slated to come out in 2017. DSP started out as a "passion project" that came to existence during the development of Starr Mazer, which is a point-and-click/shmup hybrid. You can read more about the game here on Steam. 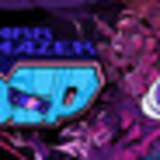