The noted retro gaming company Analogue revealed that it will issue some sort of announcement later in October.

Retro gamers of the world have long praised the output of Analogue, a retro gaming company that specializes in crafting FPGA-based versions of classic consoles like the Super Nintendo and Sega Genesis. In a tweet, the company teased a major announcement for October 16, leading fans to speculate about what they might unveil.

Several observers pounced on the use of the squared exponent in the tweet, which they interpreted as a possible hint. One reply noted that the Nintendo 64 used a superscript in its logo. Another speculated that the "2" may refer to the TurboDuo, which used a superscript two in marketing materials. The TurboDuo is a version of the NEC PC Engine--a niche console popular with collectors-- which is better-known as the TurboGrafx in North America.

Where have I seen that exponent before... pic.twitter.com/fMfKwaNsZw

Given that Analogue tends to focus on the 2D side of gaming--as well as the fact that there does not appear to exist a FPGA core for the N64, which is the technology that powers most of Analogue's consoles--the smart money is on some version of the PC Engine being announced on Friday. Hudson Soft released an official TurboGrafx-16 Mini back in May 2020, which included 57 total games, including well-known titles like Bonk's Adventure and Castlevania: Rondo of Blood. Sadly, Johnny Turbo could not be reached for comment. 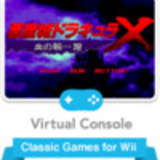