The gaming industry's version of the film world's summer blockbuster season is without a doubt the October-December rush. The holidays account for a disproportionately large percentage of the industry's annual revenue, and it's when the biggest of the big go head-to-head for consumer dollars.

With the wealth of big-name new releases hitting shelves, it's common for games to be overlooked at retail, but it's equally common for publishers to try and sweeten the deal for their latest offerings with attention-getting preorder incentives. The Retail Radar this week picked up on a few such schwag offerings that aren't of the ordinary bonus "making of" DVD variety.

First up, GameStop is offering a little bling for PlayStation 2, Xbox, and PlayStation Portable preorders of Activision's Pimp My Ride. Gamers who put money down on the game early will receive the first-season DVD set of the MTV show on which the game is based. Pimp My Ride is expected to ship November 14.

November 14 is also the release date of Koei's Gitaroo Man Lives!, a PSP revamp of the PS2 cult favorite from 2002. Those on the fence about whether or not to commit to picking up the game when it comes out may be swayed by the online-only GameStop-exclusive offer of a five-pin set for the game. Main characters U-1, Kirah, and their canine companion each get a pin, with the remaining two dedicated to logos for the game.

Yet another November 14 release is offering a bonus for preordering customers, as Electronic Arts' NFL Street 3 for the PS2 and PSP will come with a pack of NFL Street 3 trading cards from Topps. The six-card packs will also give gamers a chance to win a card autographed by NFL Street 3's cover athlete, Cincinnati Bengals wide receiver Chad Johnson. The trading card promotion is running at Wal-Mart and GameStop. 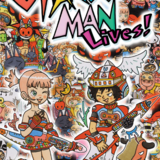