While the gaming industry is generally focused on the next big thing, there will always be a market for older games and nostalgia-laden trips down memory lane if the Wii Virtual Console and Xbox Live Arcade offerings like Discs of Tron and Tempest are any indication. The online store of retailer GameStop might be offering a heads up on the next big retro gaming releases, as the Web site is hosting product pages for Arkanoid on the DS and Space Invaders Extreme on the PlayStation Portable and DS.

Originally released in Japan last year, Arkanoid on the DS stays true to the block-breaking gameplay of its predecessors, but with several tweaks to the action. Players could control the game using the system's D pad, touch screen, or a special paddle attachment that plugged into the DS's Game Boy Advance cartridge port. The GameStop listing doesn't mention whether or not the paddle attachment would be included with a US release of the game, but the $19.99 price would be unusually cheap for a software-and-hardware combo.

Both games are listed on GameStop's site as being published by Square Enix. A representative with the company had not returned GameSpot's request for comment as of press time.

Please note, while retailer listings frequently jump the gun on publishers' product announcements, they should not be taken as final confirmation of a game's release date or existence; nor should the absence of a listing be considered as proof that a game isn't coming to a given platform. 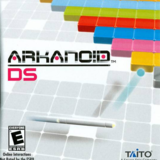