Whatever it is, it's the studio's "most ambitious and biggest game to date."

The Finnish studio Housemarque, perhaps best known for the PS4 launch exclusive Resogun, has announced that it is shifting its focus toward a brand-new title. This means all current projects, including the in-development battle royale Stormdivers, will be placed on hold while the studio works on its "most ambitious and biggest game to date."

Housemarque CEO Ilari Kuittinen penned a blog post sharing the announcement, where he also confirmed that this unnamed project is being supported by an equally unnamed partner. In the post, in which he celebrated Housemarque's 25th anniversary, Kuittinen said more will be revealed about this game soon.

"Our team of almost 80 people is comprised of talented, smart and hard-working individuals from all around the world, and it has been invigorating and inspiring to see how this game concept has turned into reality as more and more ideas have formed the basis of a truly incredible product," Kuittinen said. "Despite not knowing if we would even get past the initial stages of pre-production, we have now spent almost three years working on this game, and now we are in full-scale production and super excited to reveal more in the coming months."

Much remains unknown about this newly-confirmed game, but it's safe to assume it won't be an arcade shooter, as the studio has opted to move away from the genre in 2017 citing "lackluster sales" and a changing industry. Further, Housemarque did not specify what systems this new title will release on.

While not owned by Sony, Housemarque has a storied history with PlayStation, launching a handful of its games across the platform. Many Housemarque titles, however, are multiplatform--such as Nex Machina and Outland.

The studio's last game, the Playstation 4-exclusive Matterfall, launched in August 2017. We gave the game a 6/10 in GameSpot's Matterfall review, saying, "There is still some fun to be had, and it's easy to appreciate the technical artistry on display, but factor in inconsistent controls and long load times, and it's easy to grow frustrated throughout the Matterfall's short campaign." 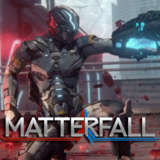