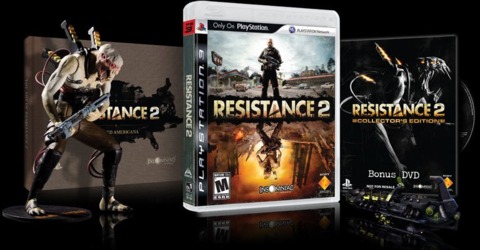 With just four months left in 2008, many a game's release window is shifting from "fall" or "holiday" to a date more concrete. Two weeks after Fallout 3 got its October 28 date with retail, another AAA game, Resistance 2, has received a firm North American launch day--November 4.

Rated M for Mature, the standard version of the PlayStation 3 exclusive will retail for $59.99. Publisher Sony Computer Entertainment also today revealed a $79.99 collector's edition (pictured), which will include a hardcover art book, special cover art, an in-game weapon skin, and an action figure of the game's alien-human hybrid race, the Chimera. Also included is a bonus DVD with a behind-the-scenes featurette, a video detailing the game's alternate historical timeline, and a digital copy of issue #0 of the Resistance comic book from DC Comics subsidiary Wildstorm.

Developed by Insomniac, the first-person shooter is a sequel to the critically acclaimed PS3 launch title Resistance: Fall of Man. It begins shortly after the first game ends, with series hero Nathan Hale escaping a Chimera-overrun London with the help of the US military. After reaching Iceland, he discovers that the xenomorph menace has spread outside of Europe to his native United States. As the game progresses, Hale travels to Chicago, San Francisco, and the Pacific Northwest, all of which are under various stages of siege by the Chimera.

Insomniac describes Resistance 2 as its "most ambitious game yet," and with good reason. As outlined in GameSpot's recent preview, the game will have two campaigns--one for single-player, and another for the game's co-op mode, which will support up to eight players. The game's various multiplayer modes will support as many as 60 players at once, with players able to use new abilities earned from gathering experience.

Sony also today announced Insomniac is readying "a worldwide [Resistance 2] competitive online multiplayer and co-operative beta beginning in early October." Those who preorder at GameStop or get an annual subscription to Sony's Qore monthly video program will receive guaranteed "premier" access for the duration of the beta, which is open to the public. Those eager in joining the Resistance 2 beta can fill out an application at the game's community Web site.

There are 260 comments about this story
Load Comments (260)