Daymare: 1998 is a survival horror title from a Resident Evil 2 fan group.

The trailer offers a glimpse at the game's eerie setting. It also features creepy voices and flashes of at least one enemy. Take a look for yourself above.

Developer Invader Studios was previously developing a fan remake of Resident Evil 2 before the project was abandoned at Capcom's request. Resident Evil 2 was released in 1998, a number that features heavily in Daymare's marketing, most prominently in its name. This new title features "many connections with beloved old school survival horror games and '90s landmark brands," according to the developer.

A number of developers that worked on Resident Evil titles have also signed up to contribute to the project. Kazuhiro Aoyama, who served as planner on the first Resident Evil and directed Resident Evil 3: Nemesis, is associate producer on Daymare. Satoshi Nakai, enemy designer on Code Veronica, is contributing as creature sketch artist.

No release date has yet been set for Daymare, which is currently only coming to PC.

For more on Daymare, check out its announcement trailer here, or its first official gameplay here. 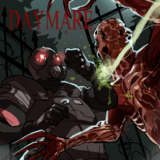