Report: Nintendo said no thanks to partnership with Activision for Skylanders--a franchise now worth $2 billion

Mario maker reportedly had the chance to partner with Activision to make the first game a Nintendo-exclusive, but the company ended up passing.

According to a new report, Mario factory Nintendo had the opportunity to partner with Activision to make the first Skylanders game a Nintendo-exclusive, but ultimately said "no thanks" to the venture. That's according to a Polygon report, which goes into depth about the origins of "toys-to-life" Skylanders series, now worth a whopping $2 billion.

According to the report, Activision was actively seeking out a partner for the first Skylanders game, 2011's Spyro's Adventure, and thought teaming up with Nintendo could be a good idea. Developer Toys for Bob traveled to Nintendo of America's headquarters and demonstrated an early version of the game.

"[Nintendo] spent a long time looking and looking," Toys for Bob cofounder Paul Reiche said. "They were just like 'we have never seen anything like this before.' I've always wondered about the full meaning of that comment [laughs]."

Nintendo and Activision would go on to sign a limited co-marketing deal, but Nintendo reportedly wasn't ready to go any further.

"We have no idea why," Reiche added. "Clearly, they have got properties well suited to this world. Why it is that they didn't rush in here will probably haunt them for the rest of their days."

It seems Nintendo isn't soured on the "toys-to-life" idea overall, however, as the company released a Skylanders-style game, Pokemon Rumble U, last year for the Wii U. Just like Skylanders, players can buy real-world toys and integrate them into the game world using the Wii U's NFC technology.

Also in the interview, Reiche says he was surprised that Disney responded so quickly to what Toys for Bob and Activision were doing with the Skylanders series with its own game, Disney Infinity, released last year. He still maintains that Nintendo could have left Disney in the dust.

"Nintendo could have kicked Disney's ass," Reiche said. "If I was running Nintendo I would have jumped on this." 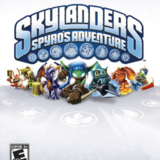