The Genesis Rent-A-Hero game garnered a cult following in Japan. Now, Sega is planning a new Rent-A-Hero adventure for the Dreamcast.

Rent A Hero No.1 is a 3D action-RPG for the Sega Dreamcast. It is also the sequel to the classic Genesis/Mega-Drive game of the same title. Unfortunately, the title never made it overseas, but some of you may recognize Rent-A-Hero as a guest character in Fighters Megamix for the Sega Saturn. The Genesis version lets you roam in a top-view perspective around the field map, where random battles occur. When you enter a battle, the screen changes to a side-scroller action format, and the battles are similar to those in games like Final Fight. Now, in the 128-bit-powered Dreamcast version, you will be able to play from a third-person perspective on a 3D polygonal field map. How you will encounter battles is not yet known, but it is possible you will encounter them directly on the 3D-field map, or perhaps you will be randomly attacked. Also, the Dreamcast version's controls will have more versatility. In the Genesis version, the characters could not perform jumps, but now your character will be able to.

The game engine is actually based on Sega's arcade action-fighting game Spikeout. Some of the motions of the character polygons are in fact also borrowed from Spikeout. Attacking enemies is simple. By pressing a button repeatedly, even a player with novice experience can execute chain combos without performing joystick commands or right combinations of buttons to press. You will also be seeing Rent-A-Hero's special moves, like the Dragon Thunder. Certain areas from the Genesis version will also be re-created in 3D on the Dreamcast version. There is a place called the Penguin Diner in the original Genesis, and you will be seeing it again on the DC, this time in 3D. Missions can vary from fighting bullies in the streets to protecting young ladies to delivering food to people's houses.

In an unusual twist, you will also be able to play as a new character called Rent-A-Heroko, who is Rent-A-Hero's female counterpart. Her origin is unknown at this point, but her appearance is very similar to R-A-H himself.

The game is still in its early stages, and no release date or pricing has been set in Japan at this point. We'll be bringing you more details and screenshots in the near future, as they become available. 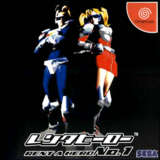